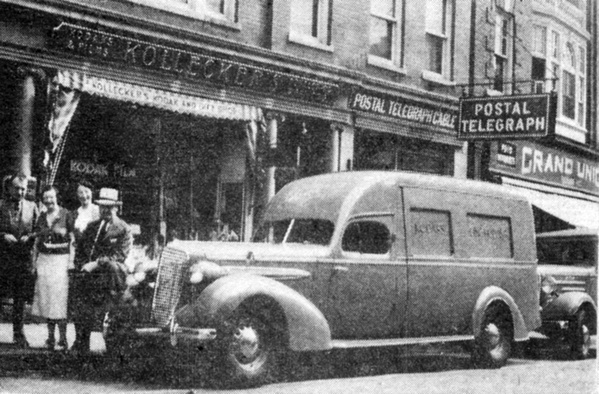 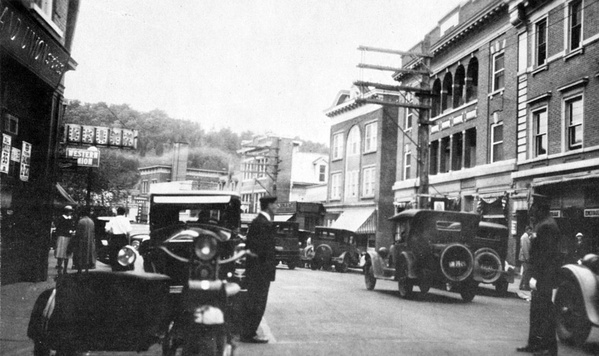 Grand Union Food Markets belong to a chain of stores that started in 1872. In Saranac Lake there was a store at 47 Main Street operated by Charlie Green that started as an Oneida County Creamery in 1927 and became a Grand Union in 1930. There were stores between 1933 and 1939 at 155 Main Street and at 69 Main Street.

'Food – O – Mat' Is An Innovation of New Grand Union

The opening of the Grand Union Super Market at 16 Bloomingdale Avenue in Saranac Lake, will bring that Grand Union innovation, —the Food-O-Mat to homemakers in the Saranac Lake area.

It has been a long time since any development in the grocery retailing world has created a stir to equal that caused by the Grand Union company Food-O-Mat, recently experimented with in already operating stores. The idea of President L. P. Shield, holder of the parents, it has everything to be desired in a "silent salesman" — mass display, low operation costs, quick turnover, customer's convenience, added cleanliness, and a saving in shelf space that is hard to believe.

Two thousand canned and bottled products that ordinarily would be arranged in a supermarket on selves extending 450 linear feet occupy only 87 linear feet in this newest self-service grocery display. Housewives doing their shopping walk about one-third of the distance they usually do, and goods are sold at approximately five times the average rate in terms of the number of square feet occupied.

The Food-O-Mat operates on a "slide-down" or "gravity" principle. Merchandise is placed on inclined metal slides. The force of gravity moves the can, package or bottle down and outward toward the shopping aisle and into the view of the customer. When an item is removed, another immediately slides into its place.

The Food-O-Mat is installed in sections, and the Saranac Lake store has 18 sections, each 3 1/2 feet wide. On top of each section is an illuminated sign, identifying the merchandise. Thus baby foods are kept in one section, canned goods in another, etc. The capacity of each section depends upon the size of the items it contains. For example, there is room in the baby food section for 140 varieties, while only 45 kinds of cereals can be displayed in one section.

The amazing compactness of the Food-O-Mat grocery space has made it possible for the Saranac Lake market to have aisles 6 feet wide, more than twice the width of ordinary super-market aisles, and the gondola space in the center of the store is used for gleaming white, glass-top, self service frozen food and ice cream cases. The Candy department and Nancy Lynn self-service bakery are as modern as design and application can make them.

The answer to an impatient shopper's dream is the Grand Union Meateria — a self-service section where all types of meats, from roasts to cold cuts are already wrapped in cellophone, and plainly tagged, showing weight, price, etc. so Mrs. Consumer needn't wait around until the counterman is free to serve her. In addition, this store will feature a fresh frozen fish department.

You can find everything you need in the way of foods and household needs, yes, even health and beauty aids in this new "onestop" shopping center.

An added feature of this store is the parking area, for the convenience of Grand Union shoppers.

Victor Delcore is grocery manager of this super-modern market and Carl Putnam keeps things humming in the meat department.

The Grand Union is well-known in this area, having served discriminating homemakers with quality foods since 1872. The new Grand Union Super Market at 16 Bloomingdale avenue, Saranac Lake, New York provides a jewel-like setting for the sale of edibles that few housewives would have ever thought possible a few years ago.