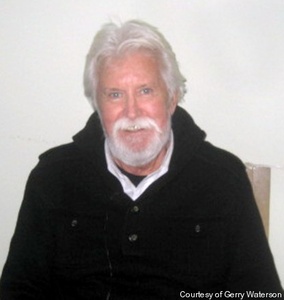 Children: Keefe, Kurt, Keegan, Kelby, and twins Kean and Kasey Riley, who own the Twin Crystal Rock Shop at 13 Broadway.

Howard J. Riley served as village trustee in 1963, and as Mayor of Saranac Lake from 5/18/1964-1967. (Not to be confused with Howard N. Riley, Republican trustee from 1964 to 1977.) He grew up on the Sisters Farm, run by his father. In his role as Mayor, he spoke at the groundbreaking for the Trudeau Institute.

Riley has worked as a tray boy, worked for the 1980 Olympic Winter Games in Lake Placid, been Saranac Lake Village Manager, owned his own business, and generally been active in the community for all those years. He is currently one of two elected judges in the court of the Town of Harrietstown and writes a column titled "You Know What . . . ?" for the Saturday edition of the Adirondack Daily Enterprise.

[...] in 1951 when I started as a printing apprentice at the Enterprise, I was making $30 a week. The owner/publisher at that time was Fred Kury and he actually interviewed me for the job. Just before I left his office he said, "We don't talk about salaries here." I soon found out why. Willie Lewis had been working there for a year before I started and was being paid only $25 a week. There were no paid vacations, no sick days, no health insurance and I was not paid when I had to go to Fort Drum with the National Guard for two weeks training during the summer. We started at 7 a.m. and worked until the paper was out, and sometimes during the winter, there would be web (the six-foot wide web of newsprint would pick up too much static electricity and tear as it went through the press) breaks and we would not finish until 5 or 6 p.m. We came back and worked Thursday night for no pay because Friday's paper had all the grocery ads which we could not possibly have time to "make up" in the morning. Those were the good old days... maybe that $2.50 a week to learn to be a radio broadcaster was a little too high.

With white hair and beard, Howard Riley bears a striking resemblance to singer Kenny Rogers. The father of six grown sons has managed the Lake Placid Resort Hotel, the local newspaper, and public relations for the 1980 Winter Olympic Games. In earlier days he was the youngest mayor of Saranac Lake. Currently he is part of the Adirondack real estate boom working as a salesman for a Lake Placid realtor. A raconteur of local renown, his roots sink dep into Saranac Lake.

HOW EARLY WERE YOUR TIES TO THE TUBERCULOSIS INDUSTRY?

I was born in 1930 on the Gabriels Sanitarium farm that was managed by my Dad. It supplied all of the produce and milk for the sanitarium. Gabriels is now a prison but it was originally founded by the Sisters of Mercy for T.B. patients in 1904. Later in the ‘30’s my father managed the Raybrook Sanatarium farm for a few years. It was a big dairy farm with 80 or 90 head of milking cows. In 1941 we moved into town and Dad went to work at Trudeau Sanitarium in the outside maintenance department. We lived on Pine Street which was full of cure cottages. I started working as a tray boy in ninth grade for $3.50 a week. All we did was carry up the trays to the patients and return them, for three meals a day, seven days a week.

DID THIS INTERFERE WITH SCHOOL?

No, the town was fully geared toward the T.B. industry. School didn’t start until 9:05 A.M., then we were released at 11:30 and didn’t have to be back until 1:30. We went to school until 4:00 P.M. The schools accommodated the patient’s schedules.

WERE THERE TRAY GIRLS?

I don’t recall any. The girls who worked in the cottages tended to be older and they were chambermaids and helped prepare the meals.

WERE YOU AWARE OF THE DISEASE BEING CONTAGIOUS?

We were aware of it as kids but never worried about it. After delivering trays, I just went home to meals and don’t recall washing my hands. I remember a teacher, Mrs. Wilson, saying that she had out-of-town relatives who would never come for a visit. If they had to drive through Saranac Lake, they put the car windows up and put a handkerchief over their mouths until they got out of harm’s way. In general, the local people didn’t worry. The “up” patients were all over town. A favorite spot was the movie theater. It was said that there was less coughing in our theater than other towns because the patients tried so hard not to cough. Of course, all of them carried sputum cups. These were disposable containers or some had disposable liners, for expectorations of T.B. patients. They looked like miniature file folders. The disposable portions were burned each night, since improperly disposed sputum was considered an agent in the spread of the disease. Saranac Lake still has a law on the books that calls for a fine of $50 for spitting on the street. The town had the best sewage treatment plant in the country for the same reason.

I had daily contact with patients. Before I became a tray boy, I used to go door to door to cure cottages to run errands for the patients who couldn’t get up. I’d pick up newspapers and other articles for them and then they would always like to chat with a kid. It was a pretty lonely life for them. It wasn’t unusual to invite a patient to our home for dinner. One used to come over to play the saxophone with my Dad when he got his wind back.

The laundry of all these people was usually done by folks in town. Large commercial laundries took care of the bedding. My neighbor, Mrs. LaPointe, did all the personal laundry for the cottages on Pine Street, Franklin, and Shephard Avenues. At the age of eleven, I did the pick-up and deliveries for her and we never worried about catching anything from the clothes. I used to joke with my brother that one day we’d be famous for picking up songwriter Ernie Burnett’s dirty socks. He wrote “Melancholy Baby.” We’d say, “Some day somebody’s going to want to know all about this.” There were just a load of jobs available. I also delivered telegrams of good cheer to patients for Western Union. When I got my license, I drove a cab. There were taxi stands all over town because the patients couldn’t walk too far. I was too thrilled, being a kid, driving a big new shiny car to worry about catching T.B. from my passengers.

WHAT WAS THE ATTITUDE OF THE PEOPLE OF THE TOWN ABOUT T.B. PATIENTS?

Well, they were just such a big part of our lives. Don’t forget that by that time the town was run by people who cured there and got married to a local or fellow patient and stayed in the village. Half the town was there because of T.B. Most of the other half worked in the industry. Before I became Mayor in the early ‘60’s, I replaced Tony Anderson, a former patient, who ran the movie theater. Tony had been mayor for 25 years.

The summer I was 17 I went to work at Trudeau Sanitarium. Most young people who grew up in Saranac lake worked there at one time or another. There were young girls my age who were patients. Trudeau didn’t have any poor people. There were a lot of young doctors and nurses who broke down due to the long hours and fast living while in training. It was populated by secretaries from large companies who were there because of their company’s insurance programs.

Many of the people living in cure cottages downtown were veterans from World War II and were covered by government insurance.

At Trudeau, patients tended to be young and better educated so you got to meet a lot of interesting people. Sometimes we used to date the patients. They’d have to sneak out. We’d park with the lights out behind the barns and wait for them. There were also a lot of student nurses from hospitals downstate, so it was a popular place with all the guys in town.

WERE YOU CONCERNED ABOUT CONTAGION WHILE DATING PATIENTS?

It’s a funny thing but you’d always ask, “Are you positive or negative?” You could be curing for the disease but be non-contagious. My father never spoke to me about sex but when he’d see me on the grounds, talking with a girl, he’d say, “You’d better be careful.” He means of course about the disease.