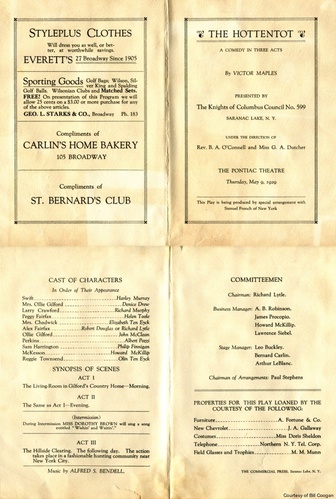 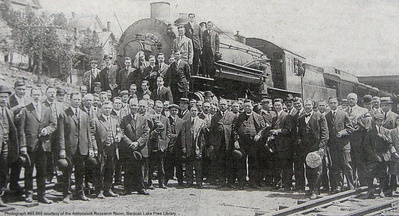 Knights of Columbus members, May 24, 1914, with a special chartered train, possibly in connection with an annual meeting, usually schedule in May. Adirondack Daily Enterprise, June 15, 2010 The Saranac Lake

Knights of Columbus hall was at 15 Bloomingdale Avenue (starting sometime between 1924 and 1931 1). They helped support the Gabriels Sanatorium; in later years, they offered scholarships to graduates of parochial schools attending Catholic colleges.

In the 1950s, they fielded a summer league baseball team, and operated a Roller Rink in the hall.

A program for the state convention of the Knights of Columbus to be held at Saranac Lake May 25 through 28 has been approved Charles H. Goldsmith. secretary of the convention committee, outlined the program.

Next morning at 9 delegates will parade to St. Bernard's church for Mass. The convention will open at 11:30 a.m. in the town hall.

Besides business sessions, a program of entertainment has been planned, including trips to Trudeau, Will Rogers Memorial hospital, Gabriels Sanatorium, Lake Placid, and the Saranac Lakes. A banquet will be held at the hotel Saturday night.