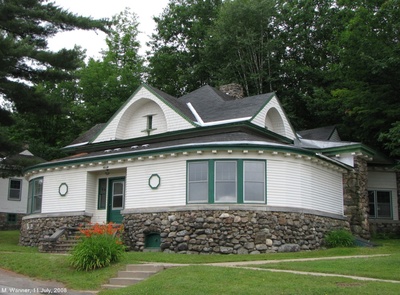 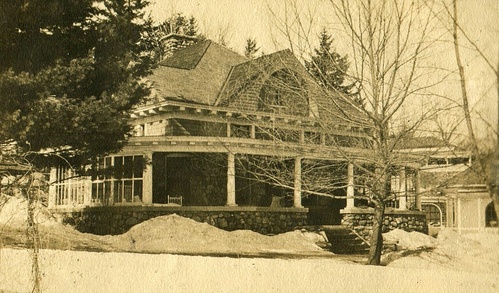 Description: Ladd Cottage, the largest of the four-patient cottages, is a one and one-half story frame cottage surmounted by a cross-gabled roof with distinctive hooded gables. The foundation and chimney are constructed of uncoursed cobblestone and the roof is covered in asphalt shingles. The building is sheathed in a cobblestone veneer, concealed on the front by the large rounded veranda, enclosed in clapboard after 1957. The cobblestone siding is clearly visible on the rear elevation. Original windows on the body of the building have diamond panes, a characteristic Coulter detail. As originally built, Ladd included bathrooms and clothes closets, both innovations at the time.

History: "The Ladd Cottage is one of our finest and is the most often shown to visitors," wrote the superintendent C. R. Armstrong to Dr. E. R. Baldwin in 1928. 1 Ladd Cottage, designed by W. L. Coulter, Saranac Lake architect, was built on the site of Pine Cottage, which was removed in 1899 to make room for it. 2 The donor, Mrs. Walter G. Ladd, and her husband were among Trudeau's "constant friends." 3 Ladd had the same basic plan as McAlpin, Anderson, Inslee and Rosenfeld cottages, including bathrooms and clothes closets. 4 Ladd was the handsomest (and probably the most expensive) of Coulter's cottages for Dr. Trudeau, a culmination of the second phase of cottage design at the sanatorium, in which ample covered porch space was provided for sitting outdoors, but in which the concept of sleeping porches adjacent to every bedroom had not yet been developed. Original windows (but not those on later porch enclosures) have diamond panes, a common feature of camps in the area and fine houses in Saranac Lake, especially those designed by W. L. Coulter, but unusual in cottages at the sanatorium.