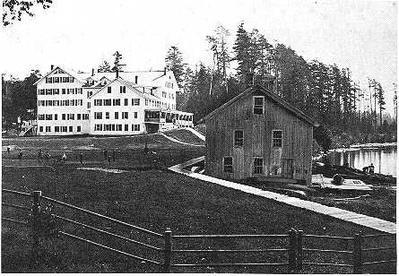 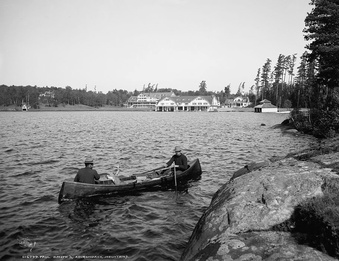 Guide boat, Lower Saint Regis Lake, Paul Smith's in background, 1903 Three hundred and fifty-acre Lower St. Regis Lake is a part of the St. Regis River. At its northern edge is Paul Smith's College, former site of Paul Smith's Hotel. Along with Upper St. Regis Lake and Spitfire Lake, it became famous in the late 19th century as a summer playground of America's power elite, drawn to the area by its scenic beauty and by the rustic charms of Paul Smith's Hotel. It is the site of a small chapel, originally built of logs, St. John's in the Wilderness, that was formerly attended by well-dressed families that arrived in canoes, rowboats and sailboats. 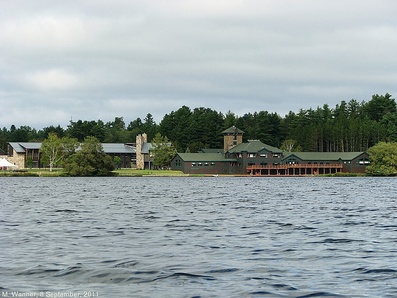 Paul Smiths College on the site of the old hotel.Paul Smith's College maintains several lean-tos on the lake. The college is the start of two famous canoe routes— the Seven Carries and the Nine Carries. 1

The camps on the Lower St. Regis Lake, owing to the proximity to the hotel, are mostly day camps, being simply delightful resting spots, which certain guests of the hotel own and where they picnic.

The camp of E. A. Hoffman, Jr., is by far the most picturesque of these on this lake. The camp is situated on the southern shore, and at night is illuminated by lanterns so arranged as to form a large cross, distinctly visible from the hotel, one-half mile distant. Mr. Hoffman runs his camp with military regularity, and the sunrise and sunset notes of his bugle are one of the features of the lake.

1. This article appeared originally on Wikipedia as Lower St. Regis Lake; its edit history there reflects its authorship. It is licensed under the Documentation_License" GDFL.