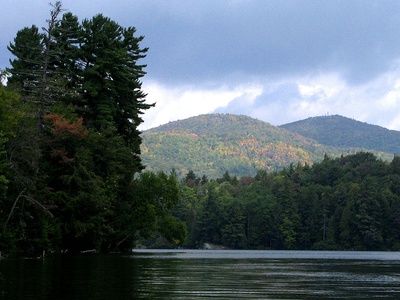 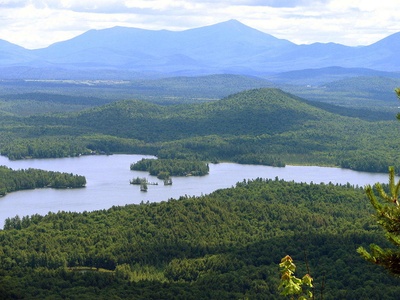 View from Saint Regis Mountain of Upper Saint Regis Lake, with the High Peaks in the distance The Seven Carries is an historic canoe route from Paul Smith's Hotel to the Saranac Inn through what is now known as the Saint Regis Canoe Area in southern Franklin County. The route was famous with sportsmen and tourists from major east-coast cities from the late 1800s through the 1930s; interest has revived in recent years.

From Saranac Inn, the route traditionally started via a horse-drawn wagon ride to Little Green Pond. Today, after a short drive over the Fish Hatchery Road from NY 30, one can put in on Little Green and then carry 220 yards to Little Clear Pond, or put in directly on Little Clear. The paddle to the St. Regis Pond carry is 1.5 miles. Little Clear is used by the State Fish Hatchery, and no fishing or camping is allowed. The carry from Little Clear to Saint Regis Pond is the longest of the trip, at 0.6 miles. At 400 acres, Saint Regis Pond is the largest pond on the route, and is well worth exploring; the carry to Green Pond can be reached by a paddle of 1.2 miles.

From Saint Regis Pond, it is a 200 yard carry to Green Pond, which is only 0.2 miles wide. Next is a 0.15 mile carry to one mile-long Little Long Pond. A 0.15 mile carry brings one to Bear Pond, which is only 0.4 miles wide. Finally, the two less than 100-yard carries and an equally short paddle across Bog Pond (no longer in the Canoe Area) bring one to Upper Saint Regis Lake, home of many Adirondack Great Camps, including Camp Topridge.

There are campsites on Saint Regis, Green, Little Long, and Bear Ponds. 1

In the summer of 1859, English author Charles Dickens visited the area, staying at Paul Smith's Hotel, with  Paul Smith himself serving as guide. Dickens described doing the Seven Carries on the way to Upper Saranac in his periodical All The Year Round, published on September 29, 1860.

1. This article appeared originally on "Wikipedia" as _Carries Seven Carries; its edit history there reflects its authorship. It is licensed under the GDFL.