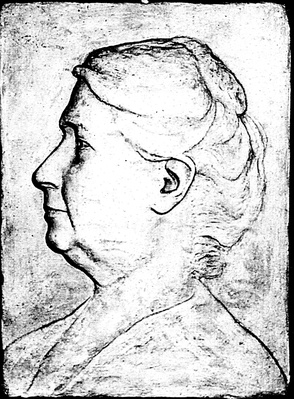 The Trudeau Sanatorium died, suddenly but after what might be called a long illness, on December 1, 1954.

As the older generation of Saranac Lake's "Trudeauites" leaves us, one by one, we cannot refrain from sensing a kind of nostalgia, a regret that the else is not now being enriched by a younger generation.

Mrs. Lawrason Brown was one of the grand ladies of that grand generation of "Trudeauites." We make this and subsequent comments only after talking with several of her many friends, since we were not privileged to know her.

Her history was like that of so many. Came here for her health, regained it. Found a mission, work, a husband, a fruitful and beneficent life. And then, after almost a year and a half of serious illness and many more of just not being well, Martha Brown died in this community which gave her life and was her life.

She must have been a remarkable woman. The legend of strength of character and of her intellect is impressed even on a relative newcomer who knew her not at all. An omnivorous reader with a brilliant mind, one of her major interests was the Saranac Lake Free Library, her next door neighbor.

As a former patient and the wife of Trudeau's director, she was also interested in the Saranac Lake Society for the Control of Tuberculosis. "Interested" is too mild a word for Brown's activities, according to all reports. "Involved" would probably be more accurate, both in the Society and in the General Hospital.

Not a wealthy woman herself, her charities were necessarily limited but she succeeded magnificently in interesting (or involving) others of substantial means in the projects which occupied her thoughts and activities.

It was Mrs. Brown who interested (deeply involved) Mr. and Mrs. Alix Stanley in Saranac Lake. Thus, Mr. Stanley gave the hospital the fortune in X-ray equipment which is the foundation of its tumor clinic.

And only recently it was Mrs. Brown who arranged for the Harriet M. Stanley Ambulance to serve the area under the jurisdiction of the Tuberculosis Society.

She was, we are told, a woman of great independence of mind and spirit who never hesitated to say what was on her mind, and to say it frankly, forthrightly and sometimes bluntly. She had, it seems, an enormous capacity for firm, deep and lasting friendship. Her love of the Adirondacks, of the majesty of their mountains and the loveliness of their streams, was a passion with her from the day she first arrived here.

Perhaps the item that impressed us most in yesterday's account of Mrs. Brown was that she operated a soup kitchen in her home for the needy of the Village during depression days.

Even those who cannot recall those days, here or elsewhere in this land of the free, will recognize that this was not only in the spirit of Saranac Lake but also in the spirit of America. They were grim days during which we all came close to losing what is perhaps our most valuable possession: confidence and faith in ourselves. Clearly Martha Brown sought, in her small way, to help restore that confidence and that faith.

It is surely this community's great privilege that Mrs. Brown lived here. Her departure leaves us that much more bereft.

To her sister, Mrs. Anne Gallagher, and to her many friends, we express our regret that we could not have shared their relationship and that we cannot now share more personally in their loss.

Dr. Lawrason and Martha Brown had a collection of over 200 autographed first editions from Robert Louis Stevenson apparently from the time he was patient at Saranac.1

Poor lovely God, omnipotent and omniscient Whole, complete and without a peer, Knowing not the joy of sin nor relief from snow purged Nor the common touch of believing man Who gives his little all that someone else may live(?) Can you see, oh God, and is that slowly falling snow The tears of your perfection?

- Written by Martha Brown during her final illness, 1956 2