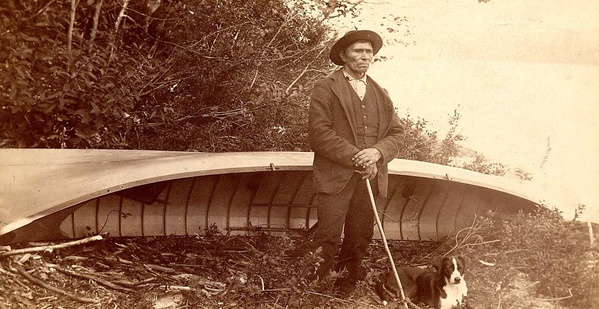 Mitchell Sabattis was among the most famous Adirondack guides. He was also a farmer, who owned as much as two hundred and forty acres of land in 1859.  After his death a mountain east of Long Lake village and a village to the west were named for him.  He was a son of Captain Peter Sabattis, apparently known as Perejeune

L. E. Chittenden, of Burlington, Vermont, made his first trip to the Adirondacks in 1846. His party camped near the outlet of Long Lake, and his guide took him fishing at Cold River just a short distance down the Raquette from their camp. Upon reaching a likely pool his guide told him to cast his fly near an old stump, and he was rewarded with an immediate strike. Some minutes later he landed his first Adirondack trout, a hefty five pounder! His guide was Mitchell Sabattis.

According to many of the early writers, Sabattis was the greatest Adirondack guide to ever serve in that capacity. His feats in the forest were legendary and, although small in stature, he possessed great physical strength and cat like agility. He was blessed with a refined instinct and was a master in the art of woodcraft. His records in the hunting, fishing, and trapping category were unsurpassed which naturally led to his being a most sought after guide. He was an Abenaki Indian, the son of Capt. Peter Sabattis who gained fame for service with the American troops in both the Revolutionary War and the War of 1812. Mitchell was born in Parishville but spent his adult life at Long Lake. 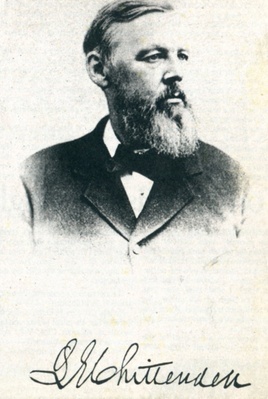 The Chittenden-Sabattis companionship was destined to evolve as one of the most intimate relationships between client and guide. When Chittenden's vacation neared its end, he spent his final night at the Sabattis home and he sensed that something was wrong. He learned that a mortgage was being foreclosed on the Sabattis home and that Mitchell was not able to meet the demand. With all of his fine attributes the guide had one failing; he was subject to bouts with the bottle. Old John Barleycorn proved to be the only adversary with whom Sabattis could not cope.

Chittenden was aware of this so he said to his friend, "What would you give if someone was to assume this mortgage and allow you time to repay it?" Sabattis replied "I would give my life." "Would you promise to give up whiskey?" said Chittenden.

A deal was struck that Mitchell agreed to abstain and meet with Chittenden on the following August for another outing. When Chittenden arrived at Elizabethtown on his way back to Burlington, he picked up the mortgage and secured it for his guide. Mitchell's wife and children had no doubt at all that he would keep his word and their faith was to prove that they were right. 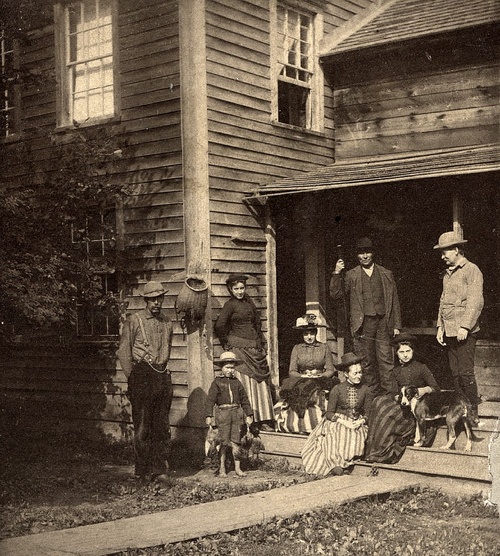 The Mitchell Sabattis family on the porch of his home in Long Lake, c. 1890
Courtesy of Adirondack Experience

Late one evening, during the following February, Chittenden answered a knock at his door and was completely surprised to find Sabattis there together with a sled laden with all sorts of furs and game. His faithful guide had borrowed two horses and made the 150 mile journey from Long Lake, across the ice of Lake Champlain, and into the city of Burlington to locate Chittenden's house. Sabattis told his friend that he had enjoyed a most prosperous season and wanted to repay his benefactor, in part, with $100 cash and the load of gifts.

In his book "Personal Reminiscences," published in 1893, Chittenden devotes a full chapter to Mitchell Sabattis and includes an inventory of the contents of the fabulous sled-load as follows: "There were the saddles or hind quarters of 25 fat deer in their skins, two carcasses of black bear dressed and returned to their skins, the skin of a magnificent catamount, with the skull and claws attached, which he had heard me say I would like to have, a half-dozen skins of the beautiful fur of the pine marten or the American sable, more than 100 pounds of brook trout, 10 dozen of ruffed grouse all dressed and braided into bunches of a half dozen, and some smaller game, with some specimen skins of the mink and fox. There was more game than my family could have consumed in a year." 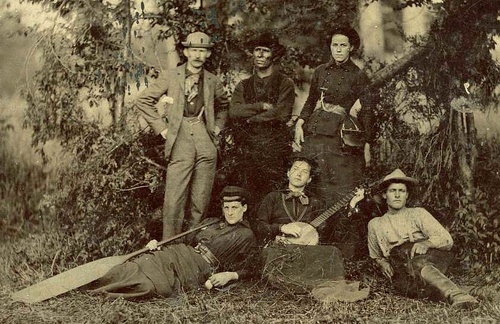 Mitchell Sabattis and party, c. 1890
Courtesy of Adirondack Museum
Chittenden accepted a token amount of the game and the balance was sold to his butcher which transaction brought cash to Sabattis in an amount to more than equal the mortgage debt. His benefactor, however, insisted that Mitchell should keep enough money to build an addition on his house and purchase some furniture. This would enable him to increase his income by taking in sportsmen during the summer seaon. The mortgage remainder would also serve to hold the guide to his promise of abstaining from drink.

On the 2nd of August Chittenden arrived at Bartlett's to find Mitchell waiting with his fellow guide Lon Wetherby. The party consisted of three "gentlemen" and their wives and Chittenden expressed a desire to camp where there would be no visitors or black flies. Mitchell and Lon had already selected such a place and had built a rough camp to accommodate their guests. Chittenden was certain that Sabattis had kept his word because he noted that the guide's eye "was as clear and keen as that of a goshawk."

The vacation was a most successful one filled with wilderness pleasures, abundance of game, and the scenic beauty of mountain and lake which combined to make the weeks a "green oasis in our lives." The skills and fidelity of the two guides were credited with the most favorable results enjoyed by the encampment. Sabattis especially demonstrated his amazing ability to track game, locate the fat trout, and provide the camp with all those comforts which only an expert could extract from the wilderness. To his patrons Mitchell seemed to be an indispensable demigod in complete control of all surrounding nature, a true monarch of forest and stream, an Adirondack legend!

Chittenden was destined to leave his favorite vacation region and assume a responsible position during the Civil War. He had campaigned for Lincoln during his election and Secretary of the Treasury, Salmon P. Chase, appointed him to be Register of the Treasury. This honor was to become a frightful burden at a later date. In 1863 the Confederacy had ordered two ironclad warships to be built in England which, when completed, would be a serious threat to Union shipping in the Atlantic. The only possible prevention of this crisis was for the Union to outbid the Confederacy with a higher offer of money for the purchase of the two ships. Chittenden was summoned to the White House to meet with Lincoln, Seward, and Chase where he was asked how soon he could prepare ten million in bonds. He stated it would require five or more days and probably more. His superiors said they had less than three days to act. It was then Friday noon and the bonds had to be on board a Cunard steamship that was sailing from New York on Monday. Every bond had to be personally signed by the Register to be legal and this issue amounted to 12,300 documents. President Lincoln asked "Can you do it?" Chittenden had serious doubts but could only reply "I will try."

The Register immediately went to his office and began the tiresome ordeal of affixing his signature to the huge stack of bonds. He had an Army surgeon stand by to supply food and any stimulants necessary to keep him going. He later stated that the painful experience almost wrecked his health, caused him years of pain, and brought about his resignation from the Treasury. The sad part of the whole affair was that, although he met the deadline, the warships were never purchased. Gettysburg had changed the outlook and Britain decided to add the ships to their own navy.

In the meantime, Sabattis had joined the Methodist Church where he became not only a member but also an eloquent preacher. In his hometown of Long Lake he was a highly respected community leader. His wife ran a successful boarding house for sportsmen and his sons and daughters had received proper educations. Fortune at last was smiling on the Sabattis household.

In 1885 the former Register of the U.S. Treasury decided to make a return visit to the Adirondacks. He found his old guide of some 80 years of age 2 to be in good spirits and Chittenden claimed that Mitchell did not look a year older than when he last saw him. The two men shook hands and spent a memorable day reminiscing about the enjoyable times that they had spent together camping, hunting, and fishing. That night they parted for the last time.

In his book Chittenden closed the chapter on Mitchell Sabattis by stating that he could not wish a more delightful memory than that of his relationship with his faithful guide. Not long after this final visit Sabattis died "full of years, full of honors, that noblest work of God, an honest man." 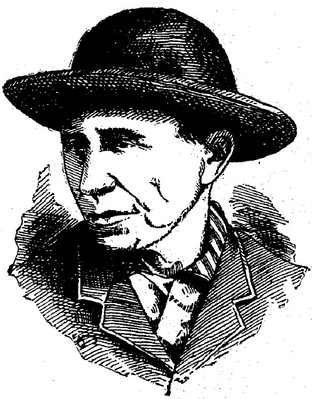 Above is a portrait of Mitchel Sabattis, the noted Indian guide, living at Long Lake. He is a pure-blooded Indian, of the St. Francis tribe, born at Parishville, St. Lawrence county, Sept. 29, 1823. His father, Captain Peter, earned the title by acting in that capacity in the war of the Revolution, and is said to have been a noble specimen of a man, intellectually and physically, and died at the advanced age of 108 years. As proof of his physical powers a place is still pointed out a little below Racquette Pond, known as Captain Peter's Rock, from which he once leaped to the shore, a distance of full sixteen feet.

The above portrait of Mitchel Sabattis is engraved from a recent photograph by Stoddard, of Glens Falls, the well-known publisher of guide books to the Adirondaoks, and is believed to be very accurate.

From his childhood, Mitchel Sabattis has followed hunting, fishing and guiding, and he knows more about wild life in the Adirondacks, and has killed more bears and panthers there, than any man living.

One of his most exciting experiences was when he drove a huge panther along a narrow shelf on the face of a ledge into a crevice, from which he was dislodged by two or three punches with a sharp stick, in order that a companion might get a shot at him, but for some reason he failed to do it, and Sabattis dispatched the animal himself, which was found to measure nine feet from tip to tip. He remembers when moose were plenty in the woods, and has killed twenty, the last being in 1864.

Sabattis is an intelligent man, and several years since wrote a detailed history of his life, observations and experiences in the woods, which ought to be published. The historian Headley, was so favorably impressed with the work that he reviewed and almost entirely re-wrote it, in readiness for printing in a book form. The manuscript is now in possession of a gentleman in Poughkeepsie.

Possessed of a strong constitution, Mitchel is still at the front as a guide at Long Lake. 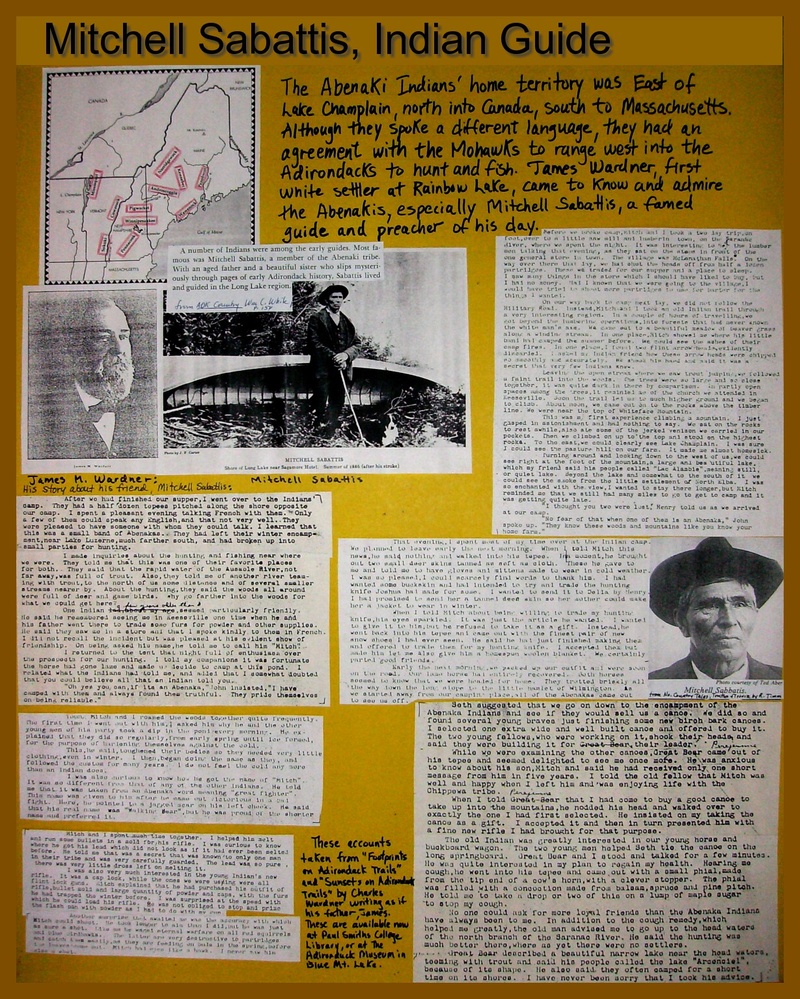 A Famous Indian Guide by Pat and Tom Willis, photo of display taken 2/2009. Click on the image to enlarge the display.

1. If the birth date given in the Plattsburgh Sentinel piece is correct, Sabattis would only have been 62.