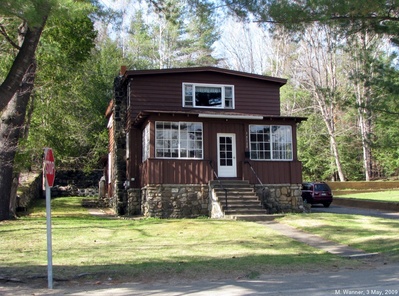 This was the home of stone mason and bootlegger Pietro Tanzini and his wife, Augusta Menzel Tanzini. It was the place where he was living when he disappeared, and where Mrs. Tanzini was found dead of a gunshot wound, presumably self-inflicted, a few months later.

On February 19, 1931, local reporter Albert I. Evans issued the following press release dated Knickerbocker Press, Albany, N.Y.: Startling developments in the case of Mrs. Peter Tanzini's supposed suicide was the alleged discovery of a huge still to which an underground passage led from the home. It is said the officers also discovered a large quantity of fake wine and whiskey labels, wrappers, foil paper, corks, bottles, gallon jugs, card board containers and other evidence that the place was the headquarters of an extensive bootlegging racket. All the material is said to have been concealed behind four secret panels that were discovered only after the most painstaking search. The still is said to be one of the largest to be found in Northern New York and worth many thousands of dollars. Bottled goods found in the place bore fake lables of well known brands of Scotch and rye whiskeys. Cartons in which the bottles were placed were marked "bottled under government supervision," "aged in wood" and similar phrases, it is reported. It is also alleged that the entire outfit is to be turned over tomorrow to federal agents. Those in charge of the investigation would say nothing today regarding the alleged finding of the still and other contraband. . . .

Hearing a gun report while working on the outside of the home at 1:35 o'clock, Norman Demo, employed as a caretaker, on investigating found the woman lying, on the floor of a bedroom on the second floor. At her side laid a .22 calibre revolver.

Demo said that at the time the woman was alone in the house, her two children, a boy eight and a girl six, being at school. He said that the woman appeared in the best of spirits an hour previously.

Peter Tanzini, 46, one time mason, contractor and business man in Saranac Lake, disappeared , during the evening of December 17, last, and has not been seen or heard from since although a most rigid search has been conducted by county and state authorities. Police are inclined to believe he has met with foul play.

The only known survivors of the two Tanzinis are the son and daughter.

New light was shed on the strange disappearance of Tanzini, and the death of his wife when state and village police uncovered an elaborate liquor manufactory in a specially constructed cache in the basement of the Tanzini home late Wednesday.

The booze plant is said to have originally cost $45,000 and is the most elaborate and complete still for the manufacture of alcohol that has ever been uncovered in upstate New York since the passage of the Volstead Act.

More rumors floated to the ears of the authorities that Tanzini had dismantled his still late last fall, but just where he had cached it was a puzzle to the officers just as Pete had proven an enigma to them for so many years.

Lieut. C. B. McCann of the state police was attracted by some fresh looking cement in the masonry on one part of the foundation wall. The other officers were interested and sledge hammers and crow bars were quickly pressed into service and the new looking section of the wall torn away.

There, in this underground treasure chest, about eight feet square, the contractor had hidden one of the most elaborate stills that officers in this part of the state ever gazed upon.

The still, fully dismantled, was complete in every detail. There was a hole in the ground with a labyrinth of coils, dynamos, motors, pipes, steam boilers, hogsheads filled with shavings and rye and Scotch malts for the purpose of aging the liquors. The rye malt, officers declared, costs $64 a gallon.

Not satisfied with this find, the officers went to the upper part of the house and in a room ceiled up with wall board, which had a mysterious appearance, they started groping about and located some secret panels operated by cords and pulleys. Four of these secret panels opened up and revealed another amazing assortment of booze manufacturing essentials. Five or six five-gallon jugs filled with unstrained liquor were found in addition to new bottles used in the liquor trade. In these cubby holes genuine looking labels of all of the popular brands of liquors were found. There were heaps of them in addition to seals bearing the Canadian Liquor Commission, stamps, corks printed in [ a genuine looking way; and the lead caps used in sealing the bottles. In addition there were wrappers with "Edinburgh, Scotland" stamps and, in fact everything one would expect to see in a reputable liquor manufactory.

Even the tiny silk threads were in the labels and various stamps had guarantees of the contents being very old, some as ancient as 25 years.

'Benedictine and apricot brandy syrups were also found and when a complete checkup had been completed the officers notified federal prohibition authorities.

The belief is now expressed that Tanzini, fearing his secret was out, constructed the special cache for his still, dismantled it and then sealed up the wall and made a get-away until the scare blew over.

If Mrs. Tanzini took her own life it is felt that it was due to some sinister influence that may eventually be traced to the illicit liquor business her husband is alleged to have been connected with.

Frank Menzel and Norman Demo of Saranac Lake, both involved in the unfortunate affairs of the Tanzini household are patients in the same ward of the Saranac Lake General hospital.

Menzel is the father of Mrs. Augusta Tanzini who is believed to have taken her own life just two months from the day her husband, Peter Tanzini, vanished from the village. Demo was employed at the Tanzini home at the time of the supposed suicide and has been questioned not only in connection with Mrs. Tanzini's death but also concerning one of the most illicit liquor making bottling and labelling plants ever uncovered in this State. He is threatened with pneumonia and his condition, as is that of Mr. Menzel, is believed to be aggravated in part by the strain of the last few months.

The finding of the huge still at the Tanzini home following the tragic events immediately preceding it have given rise to many rumors as to the history of the still, as well as to the events in which it has played a major part.

The dismantled still is again a mass of junk stored at Malone for safe keeping. The metal represents what once was a $45,000 still producing hundreds of gallons of alcohol every week in a Rochester bootleggery. The still had been purchased piece by piece by other downstate manufacturers of the illicit liquid and the government officers seized the contraption.

The still was cut up and was apparently useless. Posing as junk dealers, the Rochester men purchased the heap of metal and another large expenditure resulted in its return to former efficiency. In the meantime, New [sic] and Brooklyn men were making a fortune, reputedly, in the sale of alcohol and other "imported" liquids at Saranac Lake and Lake Placid.

At this point Peter Tanzini, missing Saranac Lake contractor and bootlegger, enters. The going got a little bit rough for the Rochester gang and Tanzini bought their still for $7000.

That has not been verified, but after Tanzini disappeared mysteriously and completely, Lieut. Charles B. McCann of Troop B, state police, questioned Tanzini's wife. Mrs. Tanzini is believed to have shot herself at home on the afternoon of Tuesday, February 17, just two months to the day after her husband dropped from sight.

According to McCann, the young woman admitted knowledge of the still and of Tanzini's former activities with it, but she said it was hidden in different parts of the woods, dissembled.

She said Tanzini had been forced to an agreement with the Brooklyn bootleggers. He had permission to sell in Saranac Lake, Tupper Lake, Lyon Mountain and other small communities in that territory, but not in Lake Placid, Elizabethtown, Port Henry and similar localities.

On one occasion he was met by his competitors as he was returning from the forbidden territory, stopped and questioned. Shortly after that he drove his car away from a busy curb in the heart of Saranac Lake early in a December evening and he has not been seen since.

After Mrs. Tanzini's death the still was found by state troopers hidden in a secret chamber behind a cellar wall of Tanzini's house.