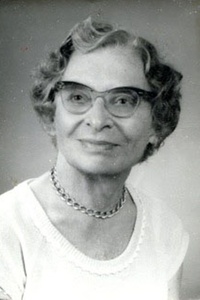 Sarah Fagin Joffe was a painter who was educated at the National Academy of Design and the Art Students' League. She was a long-time teacher of many of the artistic persons in Saranac Lake, and was a founder of the group that later developed the Paint & Palette Festival, an art show held each summer in the Harrietstown Town Hall, that was still going at the turn of the new century. Mrs. Joffe painted a series of at least 17 portraits of Saranac Lake doctors, including John N. Hayes, Richard P. Bellaire, and Frank Trudeau, that now hang in the Adirondack Medical Center. From close examination, it appears that at least some of the portraits were painted from photographs. See for example Richard G. Gould and Alfred Decker.