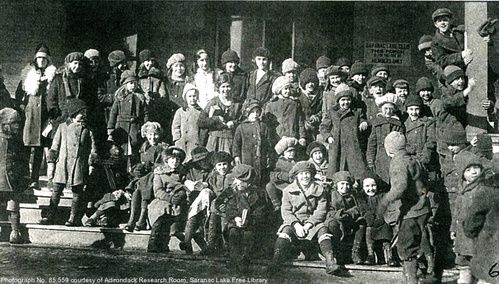 School children gathered on the Saranac Lake Club porch of the Berkeley hotel, late 1910s or early '20s. Compare the photograph at the Saranac Lake Boys' Band. The photo is catalogued without identifying the photographer, but the number 68 in the lower right-hand corner makes it likely that it was taken by William Kollecker, who made albums of photos of village activities so copies could be ordered by number. Adirondack Daily Enterprise, November 26, 2011. The Saranac Lake Club should not be confused with the Saranac Club, though it is possible that it was a renaming of the latter. In 1927, members of the Saranac Club included Phil Perry, Nicholas Pendergast, Thomas E. Daley, William F. Mulflur, Jr., John Crowley, and George Toupin. E. S. Dyer, who was a member, covered it's goings on in the Lake Placid News in the 1940s. Euclid Pine was another member.

The similarly named Saranac Club, an earlier group located on Bartlett's Carry, is sometimes confused with the Saranac Lake Club.

CLUB TO GO TO EMPIRE HOTEL

The Saranac Lake Club will move from the Berkeley Hotel to the Empire Hotel building next the town hall, about April 1st. The present quarters will be remodeled for stores.

In years gone by, when there were cars in which a deer could he taken out of the woods, an idea of the number could be obtained because they were sent out by express. But now in the day of the automobile there is no possible way to gauge the number killed. Practically all of the slain deer are taken out by cars.

Because the animals are growing scarcer, the Saranac Lake Club has asked the Conservation Commission to cut the season in half. Some sportsmen are said to even favor a closed season for several years.

So Charlie Lassen is going to leave us! Well, he will be missed by a lot of people in Saranac Lake who have been used to seeing him almost daily, going about his accustomed task of "keeping it clean" . . . I remember particularly well when he was caretaker and helper to the night clerk at the old Berkeley House when the Saranac Lake Club had its quarters in the part now used by Leonard's Furniture Store. He used to come thru the side door around ? ? a. m, [sic] and tell us to pipe down—and we usually did so . . . Best of luck and health, Charlie!

The other night in the Saranac Lake Club, some of the boys were playing a "clue" game which for want of a better name we will call "Saskatchewan." One man, in the know, is given by another man, the name of a prominent living man. The first man then, by naming various towns or persons, or countries, and a series of handclappings, gives the clues to a third man, who is doing the "guessing." A clever game; usually in ten to fifteen seconds the third man is able to name the person to be named. Sometimes the man's name itself is spelled out; at others, simply a well known habit of that man, which identifies him to the man doing the "guessing."

That gnarled old mountain cactus, Pisgah Pete says: "I drapt into th' Saranac Lake Club t'other nite, an' seen a sine on th' bullyten bored w'ich sed 'No Dogs Aloud.' I ast a feller, 'Wot's th' trubble? Is th' dogs enny louder than they use' t' be?' 'No,' sez the feller, grabbin' out o' th' air a ace in a gin rummy game, an' goin' down fer 3—'but two dogs cum in the other nite an' made so much noise thet the rest of us cuddn't hear th' bridge players argurin' out loud—so hed t' make a rulin' t' keep th' dogs out!' So I sez to the feller, 'Yeah, things is gittin' tuff all over!' and' I beat it. So long, now!"

The upper end of the Berkeley was, around 1918—occupied by the Saranac Lake Club—also considerably changed since the old days!