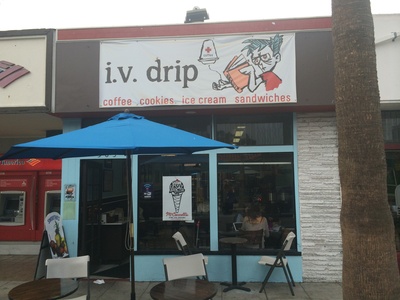 IV Drip is a coffee shop that also sells ice cream and baked items. The cookiewich is a popular item, consisting of any two cookies with a giant scoop of ice cream in between. 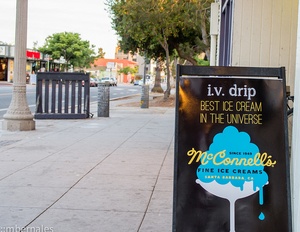 June 2013, by Marcus Bernales (CC BY-NC-ND)The Drip, as it is known by some, opened some time around 2005(?). Its name is a pun playing on several different ideas, based on drip coffee, Isla Vista's acronym (IV), intravenous drip bags which go by the same name colloquially, and the potential that you might need/want coffee injected directly into your blood stream. The menu has changed over the course of its existence and had varying items that have come and gone. The cookiewich became a signature item shortly after opening.

The staff, like many other shops in town, are usually students. The owner is an alumnus of UCSB and works the counter now and again. Business, like the traffic in IV, comes in waves, at seemingly random hours. The Drip is one of the few places open past midnight on non-finals weeks, and often gets rushes late and just before closing. Lines for coffee and cookiewiches can stretch to the door of the shop and out along the front sometimes. During breaks however, hours are usually cut, both due to a combination of errant employees and anemic business. Besides a delicious assortment of coffees and decent selection of ice cream flavors, fresh confections are baked regularly. There is usually a good selection of cookies, cupcakes and donuts. They also have brownies, cakes, croissants and freshly made sandwiches/bagelwiches.

Besides food and drink the Drip is also known for giving change that includes two dollar bills and dollar coins. You can specifically ask for them, but usually you will get a few if you get more than a dollar back in change. This has been happening since it first opened and is one of the fun quirks with which it is associated.

During Dead Week and Finals Week, they offer any sized hot coffee for $1!

The Drip is located between the Bank of America ATMs and Pho Bistro, around the corner from what is now the local Chase Bank branch, formerly IV Surf Company.