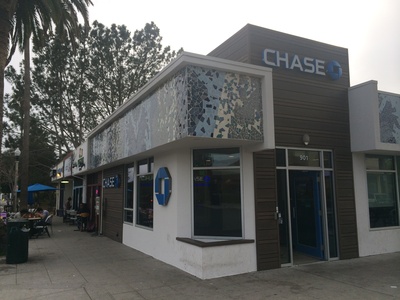 It's a convenient place to get quarters for laundry; they don't mind if you're not a Chase customer.

A Daily Nexus article says "According to the minutes of a South County Board of Architectural Review board meeting in November 2011, Chase was advised to build the bank in an artistic style that suits the Isla Vista atmosphere." The renovated building removed a mural (see Lost Murals of Isla Vista) but added a decorative mosaic.

Around the time Chase Bank set up shop, there was a petition asking them to leave, as a corporation not fitting the spirit of IV and as a contributor to increasing prices in the neighborhood.