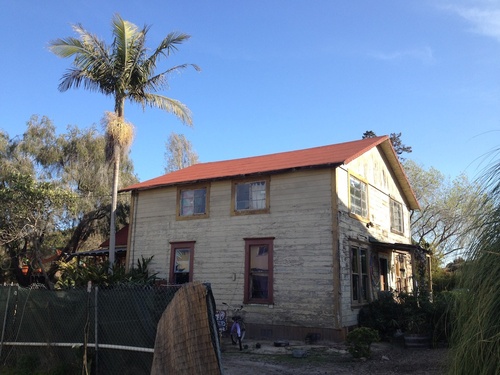 The Rancho House was a house and music venue in the middle of IV that burned down in the early morning hours of October 26, 2021. It was built in the late 1940s or early 1950s, which made it one of the oldest buildings in IV.

It was an old house made of redwood and surrounded by trees and greenery away from the roads, and it sometimes had chickens and vegetable gardens. It was different from a lot of IV's denser areas with boxy stucco apartment buildings - it felt like a bit of old Isla Vista tucked away at the center of town, even as IV changed around it.

It was traditional to keep the exact location a secret, because it was a special and beloved place that had many people living there or visiting over the years, and keeping it a bit secret helped protect that. People did regularly post the address to Facebook though when announcing concerts or other events, such as the Punk to Funk Fest in 2018. Now that it's gone: its address was 6641 Abrego Rd, slightly to the east of the back of the French Quarter apartments (near Sueno Park).

It's part of a large parcel that has been owned by Abrego Road Investment, LLC since at least the 1990s, which includes the two houses in front of it (toward Abrego Rd). The house had been poorly maintained for a long time; a person who lived there decades ago remembered that the roof was leaky and the landlord never fixed it properly, so the water kept damaging it. 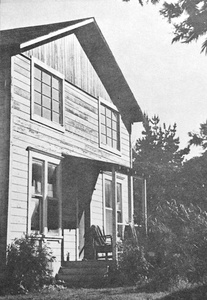 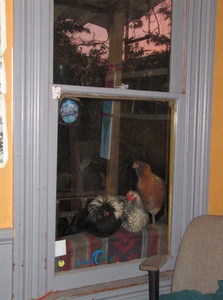 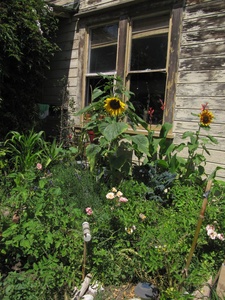 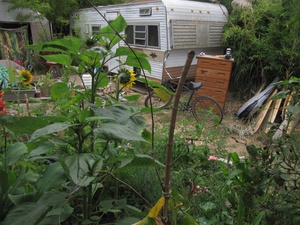 Rumors and facts: how old was it?

An article in The Bottom Line says "This serene sanctuary wins the title for oldest house in Isla Vista, built in 1885", but that's probably not true. If you know where it is, you can tell by comparing these aerial photos - it's not there in 1947, but it's there in 1956: 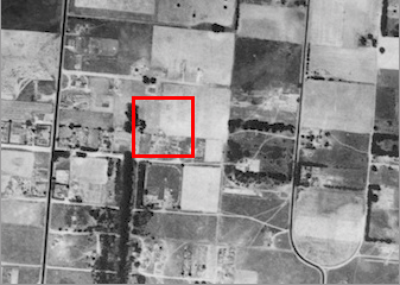 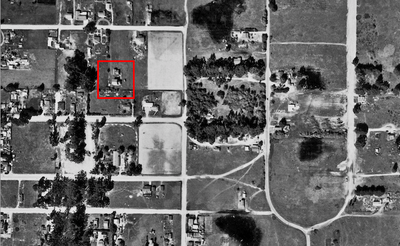 There are stories that perhaps the house was moved from its original location to IV, and that perhaps it was one of the houses from the old ranchos in the area. Rancho Dos Pueblos was a Mexican land grant given in 1842, which ran from present-day Goleta up the coast past Isla Vista (and you can trace land ownership from that grant to the present day). There's a lovely map here from 1871. It's likely that the remaining houses from that century are recognized as historic structures by the county (and they are probably adobe houses). For example, the Daniel A. Hill adobe at 35 South La Patera in Goleta, from about 1850, is recognized by the county as a "place of historic merit". The county's lists of places of historic merit and landmarks don't list any structures in Isla Vista. But who knows...

When Rancho House was built, presumably in the early 1950s, there were very few buildings in IV. The Red Barn showed up sometime before 1950, when IV was a rural area with no running water and few roads, just a few beach houses and small farms. Marine Corps Air Station Santa Barbara was built in 1942, and UCSB moved into its old buildings in 1954. St. Michael's University Church established a small building in 1954, Isla Vista Market opened in 1956, one of the the three houses at the end of Del Playa was built in 1957, and Nebi's Coffee Shop was built in 1959 as its first restaurant,

In 1964-65, UCSB students organized a free speech group that frequently met at this house, along with other activist student groups. Details about SFPA from the UCSB Living History Project: "In response to growing political actions at UC Berkeley, students at UCSB organized SPFA Students for Free Political Action...The Students for Free Political Action (SFPA) were formed during a period at UCSB and campuses across the country when students increasingly became politically active. SFPA was particularly interested in assuring the means for political free speech on campus, including students' rights to distribute literature, invite speakers, etc., and to encourage student participation in their university government."

They posted meeting announcements in the student newspaper: 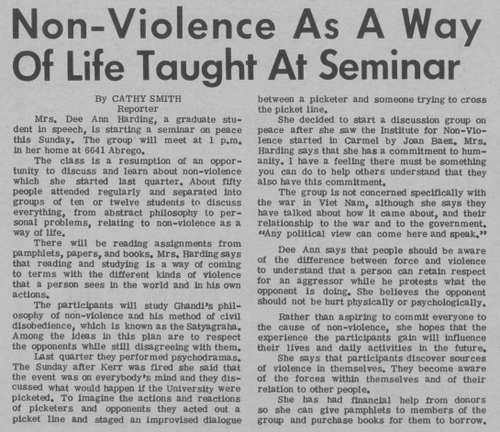 Rancho House stopped hosting gigs around or before the pandemic arrived in March 2020, and the structure may have been condemned. It stopped having gas and electric service. It burned down early in the morning on October 26, no injuries reported.

From KEYT news: "The building, described as a family residence, was fully engulfed when fire crews arrived shortly after 3:10 a.m. on the 6600 block of Abrego Road. Neighbors say the home was abandoned but frequently had people inside."

From The Independent: "His understanding was that the building had been abandoned for some time and was not well-secured. One video posted of the fire shows a green construction fence to one side of the building."