Isla Vista has more than a few ways to get from place to place. One such mode of navigation are the many shortcuts that run through the many large blocks. Shortcuts come in many forms, sometimes a driveway that extends from one street to another, an alleyway, or perhaps just a hole cut in a fence between properties. Many of these come and go as property owners fix or add fences and as the town is redeveloped.

One of the more stable of these shortcuts is the access route from El Colegio to Picasso Road and Berkshire Terrace. 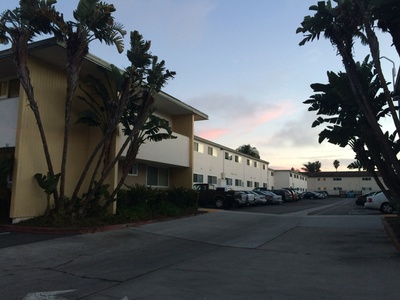 Looking south from El Colegio, Westwinds is at left - go to the back and left of this parking lot. January 2015, by Britta Gustafson (CC BY-SA). 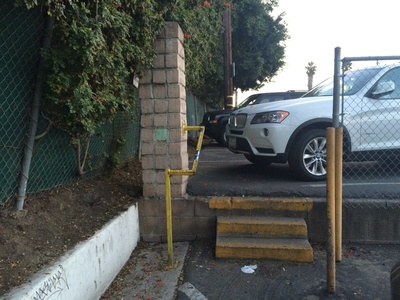 Stairs at the back of the Westwinds parking lot, looking south. January 2015, by Britta Gustafson (CC BY-SA).

Walking into the shared parking lot of the Westwinds Apartments, you walk to the tee and turn left, then to the end and up the stairs, which leads you to the parking lot behind Berkshire Terrace. From here you have the choice of walking down the alley to Picasso, turning to the right and walking the length of the Berkshire Terrace Parking lot to Camino Del Sur, or turning left and passing through one of Isla Vista's many inter-block hidden spaces. 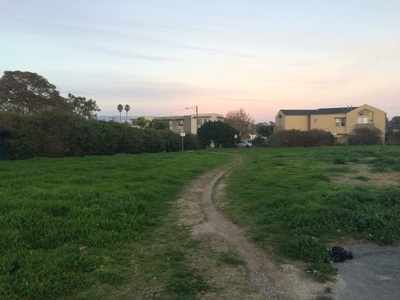 Looking east at the unpaved lot between Camino Pescadero at east, Picasso Road at south, and Berkshire Terrace apartments at west. The tiny sign at back left says "Tow away, authorized parking only", although it's unclear what this is a parking lot for. January 2015, by Britta Gustafson (CC BY-SA). 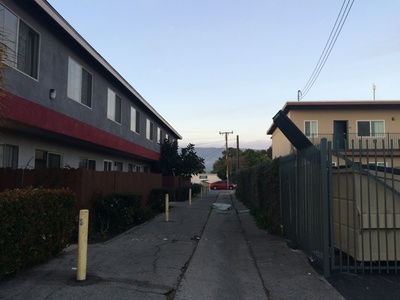 The left hand choice leads you onto an unpaved lot with a dirt trail and at one point a tree. It has been used by residents for many casual uses, some times as a park, or BB gun shooting range, or most amusingly as a used furniture sales lot. From there, the path leads to a parking lot and driveway that continues onto Camino Pescadero, between Cervantes Road and El Greco Road. 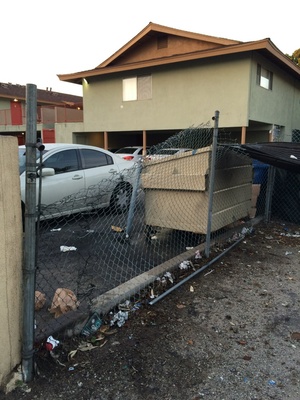 The southern route could be followed across Picasso to the driveway between 6639 and 6631 and it's a matter of hopping a fence (there used to be a hole behind 6631). Walk through the parking lot of the Mono Kai Apartments, like you live there, onto Abrego. If you aren't close enough to the ocean, you can walk down the walk/driveway of the French Quarter apartments at 6643 Abrego and try to hop the tall and intimidating fence to Sueno Park; there used to be an intentional entrance that was removed a few years ago.

Other shortcuts are less sketchy and better maintained. Anisq'Oyo' Park is a shortcut from one Embarcadero to the other, for example. Trigo-Pasado Park is another such mid-block park that allows access from on street to another. 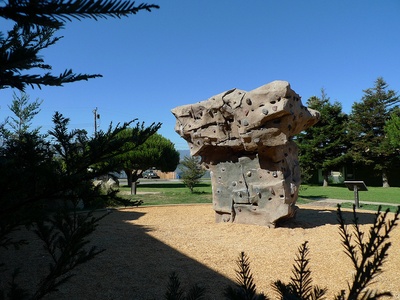