At the beginning of summer (and to a lesser degree at the end of summer), basically everyone in IV moves. Some people move out of town and others just move to a new location in town.  The importance of this is specifically related to the general affluence of the students moving, and directly to the waste they leave behind - the saying holds true: one person's trash is another's gold.

The items left behind 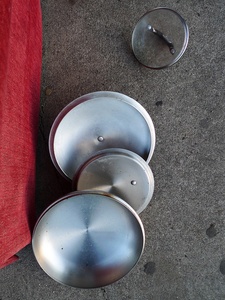 A variety of free lids for pots and pans next to a free red couch, June 14, 2010. By Britta Gustafson (CC BY-SA).Typically large items are left behind. Most furniture and large appliances that are too difficult or offer too much trouble to the moving student, are left curb side. Many times they will pile up on and block portions of the street. Sometimes these items remain for a long period of time, several days perhaps. But more often than not they are picked up and recycled by the more practical residents. During one of these more furniture-filled weeks, an enterprising group of residents with a truck once picked up all of the furniture of value and consolidated them into the empty lot on the block north of the 6600 block of Picasso Road, where they sold them at reasonable prices to people in need.

Furniture at any given residence may have been recycled as many as four or five times, in as many locations. Beside leaving items on the curb, residents often know or have talked to the new residents moving in after them, and will coordinate to see what furniture to leave and what to recycle on the street.

Beside large items, other things of a more ephemeral nature are often left. Dumpsters regularly overflow or are just ignored, and large piles of food and interior luxuries build up around them. Lights, chairs, entire contents of a refrigerator, and anything that can be replaced with only a trip to the market or Home Depot are left for anyone to pick through.

The move out day experience

A mix of move-out day trash and usable items on Del Playa, June 14, 2010. By Britta Gustafson (CC BY-SA).By many of the more mercenary residents, it is seen as a sort of holiday and they will take a day or two off their day jobs to scavenge through the wreckage that is Isla Vista. A friend working at Freebirds her first year in town, was asked if she would be working or would be out scavenging on move out day. Being her first year in town, she had no idea what they were talking about. She remarked that they treated it as an actual local holiday.

The town is usually littered with trash of varying sizes by the end of the week. The informal event has both good and bad aspects. While you can find all your food for the next two weeks and fill your fridge to the brim just by walking around your block and visiting the dumpsters, as well as finding any needed furniture or other valuable items, the town ends up pretty well trashed.

Adaptations: the GIVE Project, Adopt-A-Block, and more

The Free Box is typically taken away during the last couple weeks of the school year, to prevent people from overwhelming it with piles of stuff as they move out.

Instead, UCSB organizes the annual end-of-school-year GIVE sale, where it collects vast piles of reusable items from students and other UCSB/IV residents, organizes the items into a huge yard sale in the Embarcadero Hall parking lot, sells them for a weekend, and donates the proceeds to nonprofit organizations that serve IV. In 2010, the sale raised more than $27,000. The GIVE Project has a website,Facebook page, andTwitter account where you can learn more. It is mostly run by volunteers.

Other alternatives to dumping things on the street: give away usable items on Craigslist's free section, give unopened food to the AS Food Bank (or give it to the GIVE project, which will hand it to the AS Food Bank), give opened but usable food (such as spices or other pantry items) to IV Food Not Bombs, give items to the Alpha Thrift stores in Goleta (they can even schedule pickups), and check out the SB Less is More website for other reuse and recycling options.

During the approximately two weeks of move-out, the county steps up its enforcement of rules against outdoor couches and other outdoor soft fluffy things tempting for burning in the streets, to reduce the likelihood of people setting lots of couch fires.