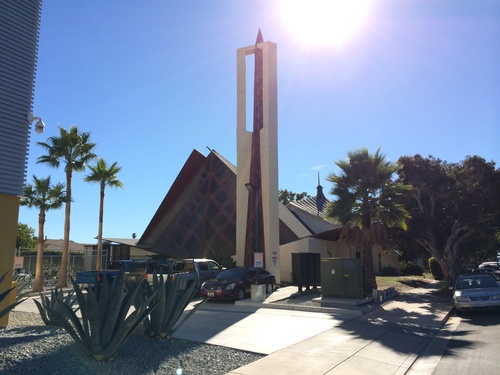 Frank Schaefer, the current pastor, had previously been the pastor at Iona United Methodist Church, where he had been defrocked due to a November 2013 church trial that found him guilty of violating the United Methodist Church's Book of Discipline by conducting a same-sex marriage ceremony for his son. In December, Bishop Minerva Carcaño determined to find Schaefer a home in California-Pacific Conference, and appointed Schaefer to Isla Vista Student Ministry. In June of 2014, the Northeastern Jurisdiction Committee of Appeals wrote a unanimous decision that the defrocking penalty was itself a violation of church law and reinstated Schaefer's ministerial credentials. In October, Schaefer was reinstated. In July of 2014, an appeal was filed on the appeal, but in October of 2014 the Judicial Council reaffirmed Schaefer's credentials in a "final decision". 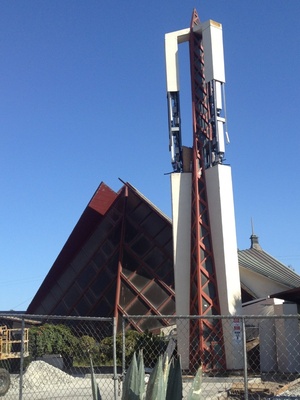 The church was built at some point between 1956 and 1966 according to aerial photos, possibly 1961 according to a record of when the Korean United Methodist Church non-profit was founded. According to the UCSB and Isla Vista Walking Tour, the church was the "site of many community meetings in the 1960s". It continues to host occasional community meetings and other public events, and hosted a community garden for the Isla Vista Recreation and Park District starting in 1978 before expanding building to that area.

The church building has a unique and striking mid-century design. It marks a period in the late 50s and early 60s where IV was rapidly expanding into a dense neighborhood instead of sleepy rural fields and cottages.

The tower is a cell tower, built in 2006 and designed to match the style of the main building. The cell phone companies rent the spot from the church.

The apartment complex next door (Campus 880) is on a lot that used to have the Isla Vista Youth Projects Children's Center (run in a partnership with the church for many years) and a small house, described in the article at Parking Lot House.

Churches are an important type of gathering space, especially in an area that historically has not had all-purpose public buildings such as libraries or community centers - along with religious services, this building has hosted governance-related meetings and IV's juggling festival. Social institutions contribute to making a mostly-residential area like IV into a living, active place instead of just a bedroom suburb.

This church provided space for IV's daycare center for decades, and it rents space for a cell tower. An institution can serve the community with this type of flexible use in a way that is hard for residential space.