UCSB has an Urban Art Workshop class where students paint murals on buildings in Isla Vista in collaboration with property owners. It's an interdisciplinary course sponsored by the UCSB Community Housing Office (CHO), run in partnership with Isla Vista Arts and the UC Institute for Research in the Arts. The students and property owners work together to decide what the murals will look like.

The story of the class: "Jenn Birchim, marketing and administrative services coordinator for the Community Housing Office, said the urban art workshop first began when office intern Kat Frazer suggested resurrecting I.V. murals that have been painted over. After partnering up Ann Hefferman, a local artist and assistant and supervisor at Davidson Library, the Urban Art Workshop was born. For Birchim, the recent art collaborations have the power to bring the artistic culture of I.V. back to life — an important accomplishment given the many efforts that have been made to cover up I.V.’s iconic, but underappreciated, murals, she said. “It’s kind of trying to bring art back,” Birchim said. “Many of the buildings in Isla Vista, like the Bob Marley house [or] the mermaid house, are becoming icon[s] and a lot of them are being painted over,” Birchim said. “So, we’re really kind of spearheading this thing to bring that character back to the houses here.”" 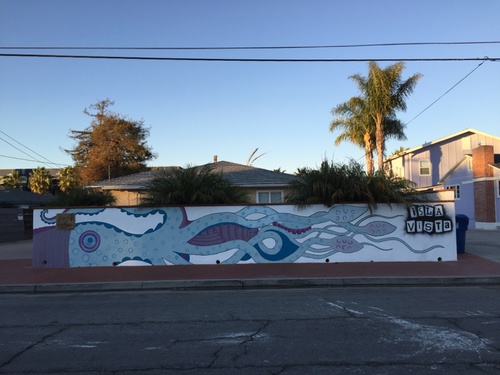 This blue and purple squid was the first mural painted by this class: "Kat Frazer, student intern with CHO, hopes to see more art around Isla Vista to add vibrancy and art back into the college town. “At a recent staff meeting we were talking about how we needed to add a ‘wow’ factor back into Isla Vista,” said Frazer. “I suggested that we team with local landlords to put lasting art back into the streets of Isla Vista; this is the first mural of many that we hope will be in I.V.”" This class was led by artist Jorge Alvarez. 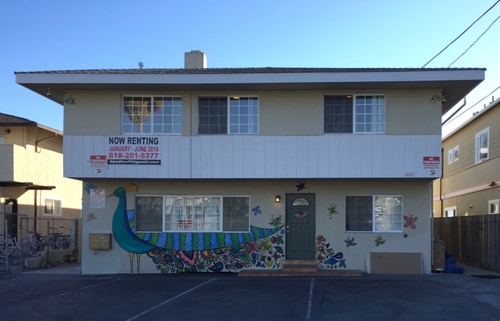 The story of this mural, as told by professor Ann Hefferman: "The first time I taught the class the client wanted art on the facade of the building that might subdue the party atmosphere of the apartment complex. Kat Frazer's design ended up being the chosen one, which was a nice turn since the concept of the class was hers in the first place. And although it was her design, the students got to colorize and embellish it in their own way. It was a great collaboration, and great camaraderie. In this one, the client visited the site as we were working and asked us to make a change in the shape of the peacock's tail, which required some over painting and retouching."

More photos of this mural.

Another photo of it. 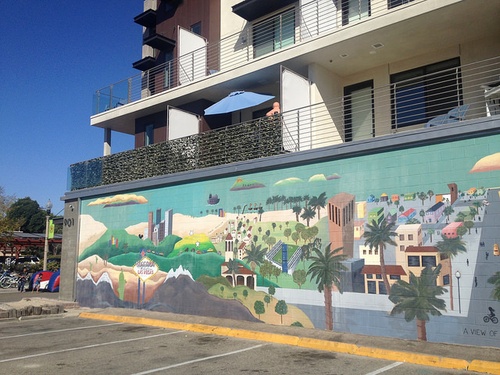 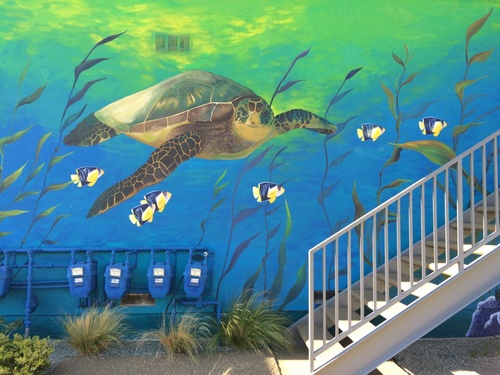 The Turtle Mural on 65 Block of Sabado Tarde was painted in 2014, by a class coordinated by Ann Hefferman: "Representing the six victims who lost their lives in the mass murder on May 23, the fish were included into existing imagery that commemorates the last time Isla Vista was shaken so violently, when David Attias killed four people in 2001." 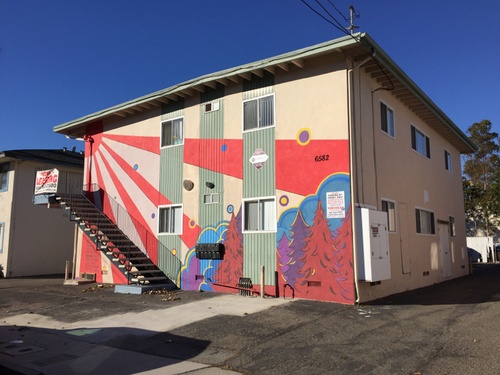 This mural, witha pink sun and red and purple trees, was led by Jeff Paige: "In Gabriel Cardenas’s brightly colored mural, the sun shines onto the earth, nourishing red-and-purple trees that produce life-giving oxygen and diminish — in their own small way — the carbon footprint left by human industrialization." 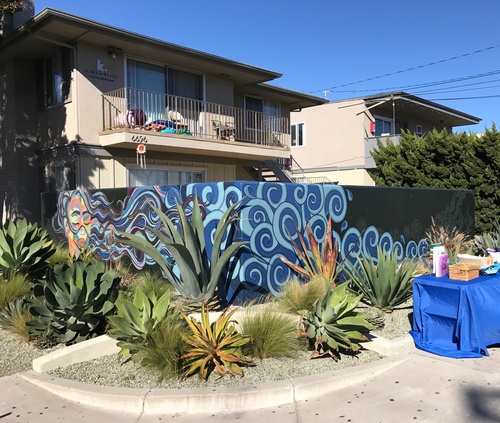 March 2017, by Jay Freeman (CC BY-SA)This mural was painted by a group of artists led by Gabriel Cardenas, in a class formally taught by Kim Yasuda. The design is by Janette Guiselle Sanchez. One of the students in the class wrote about his experience. 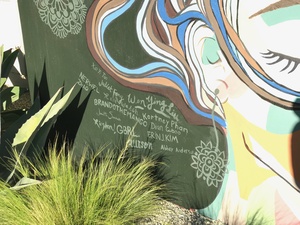