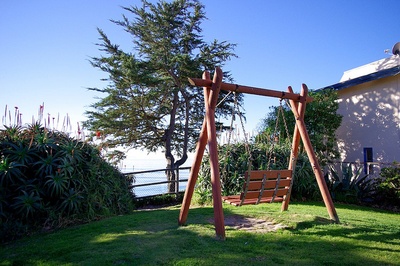 Located between 6685 and 6693 Del Playa Drive, Window to the Sea Park hosts a collection of flowers, shrubs and trees beneath its famous loveseat swing where one can observe the Pacific Ocean from a perch on the cliff. Window to the Sea Park is owned by the Isla Vista Recreation and Park District (IVRPD) and is open to the public for recreational use.

In 1972, the IVRPD was established by Isla Vista residents to address the community’s need for recreation facilities and open space.1 Upon inception, the District outlined a set of primary goals that included the creation of three parks and a district office. In 1979, a $1.15 million bond was approved to purchase open space and recreational facilities for the first IVPRD established parks in Isla Vista.1 As described in "More Than Just Parks" by Christina Ziegler-McPherson, those initial parks include Madrid/Anisq' Oyo Park, Children's Park, and Window to the Sea Park.2 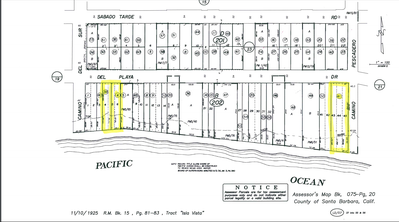 Land parcel map. Two highlighted parcel on the left side became Window to the Sea Park. Image provided by SB County Assessor's Office.The Window to the Sea site is located along the intersection of Camino Del Sur and Del Playa. It is a small piece of land, made up of just two 25-foot parcels as seen in the map to the right.

The land was originally leased by the Santa Barbara Parks Foundation in 1973 from the Mattice Investment Corporation. Then in 1974, the IVPRD took over the lease. This held until 1977, when following an out-of-court settlement with Mattice, the District bought the land for $20,000. The land parcels were purchased with combined funds of a state grant and a 1975 bond sale.2

Window to the Sea park was created in memory of Isla Vista Community Council (IVCC) activist Robert Connor, who passed away in 1973 after losing a battle with African malaria. Unfortunately the Isla Vista Community Council could not name the park in his honor as they had hoped due to a policy of the time that disallowed individual’s names representing park land.2 This technicality aside, Window to the Sea Park is such a well loved and meticulously maintained park it surely serves as a proper tribute to an active Isla Vista community member such as Mr. Connor. 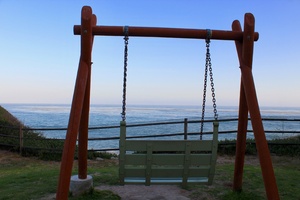 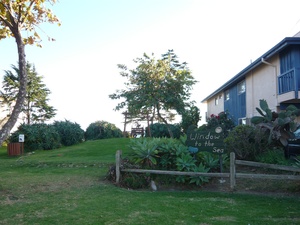 November 2008, by Ryosuke Yagi (CC BY)The park is a popular recreational destination for Isla Vista residents. Many people come to the park to slackline, walk their dogs, or simply read and relax in the park’s grass. The most notable feature of the park is the two-person loveseat swing that stands near the edge of the park facing the ocean. Ethan Schwartz of the Santa Barbara Excursion club praises the park for its sturdy and perfectly placed trees that he uses for organized slack-lining trips. Another student, fourth year Stephanie Schechter of the UCSB Surf Team, says it was the first park she ever visited in Isla Vista. She appreciates it for its small size and convenient location right across the street from her house, and often enjoys her mornings on the swing overlooking the ocean.

Despite its small size, Window to the Sea Park has various attributes that make it an inviting environment for everyone. In 1974, a bench and a sign were built in the corner of the park closest to the street, and in 1983 a wheelchair accessible walkway was installed. A new sign was designed by Gareth Conway in 1998, who won a community contest and was awarded $200 to paint it.3

The Isla Vista Recreation and Park District also makes Window to the Sea Park available to rent for events such as barbeques, graduation ceremonies, concerts, and other community gatherings. The events are allowed to hold up to 50 people and usually involve food and music.4 Although the park is small in comparison to other parks in the vicinity, its sentimental value as well as practical usage to Isla Vista residents makes Window to the Sea Park an important piece of the Isla Vista community. 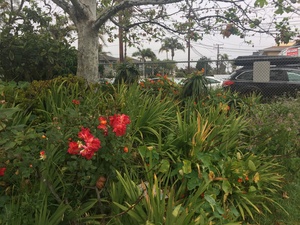 June 2017, by Jenny SalingerWindow to the Sea Park is managed and maintained by the Isla Vista Recreation and Park District Grounds Crew, with Brad Collison as the current grounds member in charge of this park. Over the past decades, various groups have contributed to the upkeep of the park, including the Isla Vista Planning Commission and the Santa Barbara Parks Foundation. The plethora of dense plant life along the edges of the park, including the edible and beautiful flowering nasturtium, require a good deal of trimming and cleanup to keep the park looking clean and visitor friendly. 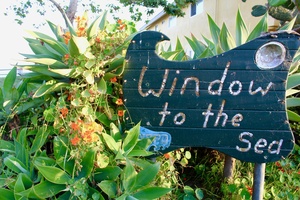 June 2017, by Mariah HaightThe park's main attraction, the swing, also requires a great deal of upkeep. Because of the park’s frequent public use and oceanside location, the swing broke down over time. In 1996, the swing was removed for maintenance before being reinstalled. Since then the bench piece of the swing has been periodically removed and reinstalled, likely for painting and other types of maintenance. Other permanent structures of the park such as the fencing and sign have been worked on throughout the years, with the top rail of the fence being installed in 2000 and the sign replaced in 2004.3

Marc Borgman remembers: "I was Grounds Coordinator for IVRPD 1979-1984, this was my favorite park. There was no water meter for this park, which made maintenance of it problematic. Early on I asked the owner of the apt to the east (Richard something, a local well-known landlord and businessman) if I could steal water from his apartment to water the park. And it was illegal to move water across property lines in those days, and because that was illegal, the Park District could not pay for the water either. He said okay, it was in his interest as a neighbor to have the parks next door looking good. I didn't mind breaking the law one bit in order to keep our parks green."

"Also, the original swing was redwood and had significantly deteriorated by 1980 or 1981. Plus we had complaints about splinters. So I tasked my Maintenance Specialist Gareth Thompson (a nice English lad we had as a CETA-funded employee) who was a better carpenter than I was to build a new one. He made a heavy-duty one out of excellent white oak he sourced. It was still in good shape in 1984, except for needing some new finish coating."

While the Window to the Sea park is listed as a “passive” recreation area according to the Santa Barbara County Planning Board, it takes a community to maintain and support parks such as this one. The Isla Vista Park District Grounds Crew has continuously managed and maintained Window to the Sea Park, making it available for students and other members of the community to enjoy for nearly three decades. However, park goers play an integral part in keeping this area trash free, clean, and ready to use. So get out there, and enjoy the park responsibly. 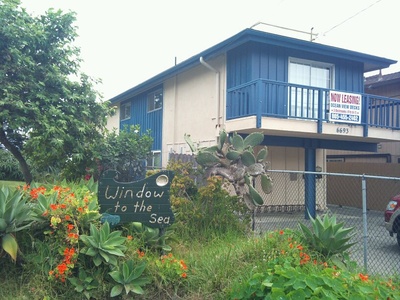 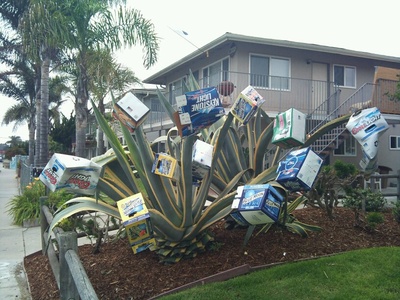