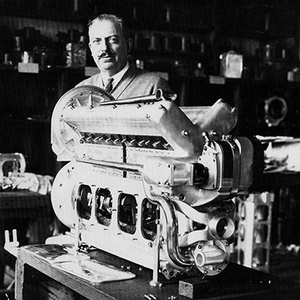 Harry Miller poses with one of his famous dohc, 91-inch straight-eight race motors. In all, Miller-based cars or engines won 39 times at the Indianapolis 500.
Harry Armenius Miller was the greatest creative figure in the history of the American racing car, whose engines and cars dominated American racing for almost half a century. To understand American racing you must know the story of Harry Miller.

Harry Miller was born on December 9, 1876 in Menomonie, Wisconsin to Jacob Miller, a German immigrant, and Martha (Tuttle) Miller. Jacob was a teacher, musician and an accomplished painter. Harry on the other hand, possessed mechanical aptitude, and much to the dismay of his father, dropped out of high school at age 15 to work in the Knapp, Stout & Co. Company machine shop.

At age 17, he left to seek his fortune, ending up in Salt Lake City. He returned to Menomonie a year later, but in 1895 left again, this time for Los Angeles, where he worked in a bicycle shop. He married Edna Inez Lewis, and since money was tight for the couple, returned to Menomonie and his old job in the machine shop.

Perhaps it was the steep hill between his home and his job that inspired Miller to build a motorcycle --- a bicycle on which he'd mounted a one-cylinder engine --- which is thought by some to have been the first in the United States.

In the mid-1890s, Miller built the first gasoline outboard engine in the country --- a four-cylinder engine which he clamped on a rowboat and showed his friends how to enjoy on days off. Unfortunately, Miller didn't bother to protect his invention.

By 1897, Edna became homesick and they had returned to Los Angeles where he opened a machine shop. Miller built his first automobile in 1905, something he'd resisted when Edna first suggested it. He was active in the design of engines for inboard racing boats, and airplanes, but he was to make his reputation in the design of racing cars,.

In 1916, Miller's first racing engine came to the attention of Barney Oldfield, a top race driver of the day. The two then collaborated, resulting in the "Golden Submarine," a streamlined racer that brought Miller his first recognition as a car builder.

Success continued through the 1930s and after Miller's death from cancer in 1943. He was involved in development of the rear-engine Tucker automobile.

Visitors to Fulton’s Workshop at the Rassbach Museum in Menomonie’s Wakanda Park, can learn much more about Harry Miller and why he was known as “King of the Race Car Builders.”