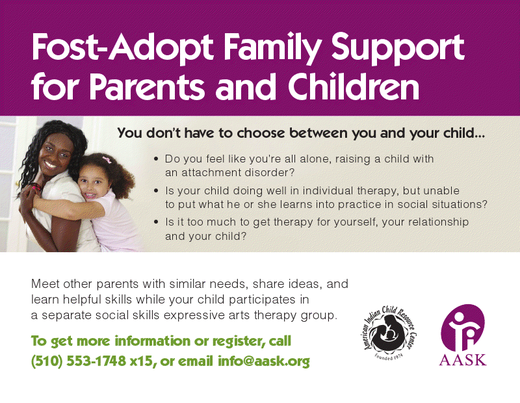 AASK believes that every child has the right to a safe, stable, and nurturing home and that all children are adoptable. AASK America provides education and support services to adoptive and foster families and children. AASK also promotes positive changes to benefit children who are in the child welfare system.

AASK inspires change in the lives of children in foster care by promoting and sustaining permanent families. The organization identifies and trains competent, caring foster care and adoptive parents, provide education and support services, and nurture stable homes for foster kids. AASK has promoted permanency for foster youth and placed thousands of children with loving families since 1973.

Robert and Dorothy DeBolt adopted a special needs child named Sunee who had been paralyzed after having contracted polio.  That was in 1971, and the DeBolt's already had six biological children and four adopted children.  But their experience with Sunee, who was considered ‘unadoptable’ by adoption agencies, lead to the DeBolt’s nine more special needs children over the next few years.

In 1973 Robert and Dorothy DeBolt formed AASK due to their encounters with unsupportive and resistant government programs and adoption agencies.  The mission of AASK was to recruit and assist families interested in adopting special needs children.

As the organization grew, AASK became a leader in the advocacy for special needs adoptions, which has lead to the implementation of other programs throughout California and states such as Arizona, New Mexico and Ohio.

AASK spearheaded PAARP in 1978, which is a combination of state reimbursement for adoptions completed by private agencies, making it much more financially viable to offer services at no cost for families who adopt special needs children.

The Adoption and Safe Families Act, signed by President Clinton in 1997 was another concept AASK drafted and championed until the landmark legislation was passed, thereby placing pressure on states to minimize delays in the adoption of children with special needs.

Then in 1993, AASK changed the agency's focus solely to children waiting in the child welfare system.  The available children shifted to more Latino and African-American children, sibling groups, and older children.

Responding to pressure to place children internationally, Bob DeBolt wrote:  "As worthwhile as these causes are, and despite the fact that they may have brought substantial funds to AASK, we have turned them down. We have deliberately limited our efforts to the tens of thousands of special needs children in the United States."

AASK became solely focused on finding permanent for foster youth in California as of the mid-1990’s.

Collaboration between AASK, California counties and UC Berkeley’s Lair of the Golden Bear led to the creation of the Camp ALWAYS (A Life With Adoption Yields Success), a five-day summer retreat for adoptive families featuring speakers and trainings for parents and outdoor activities for kids which began in 2002.

In 2011, AASK was one of the first in the United States to receive a Seal of Approval and be recognized as a Leader in Supporting and Serving LGBT Families by the Human Rights Campaign. AASK also now collaborates with the American Indian Child Resource Center to assure that native children maintain a strong connection to their tribal and cultural heritage during and after their adoption.

With more than thirty-eight years of service, AASK has continually built upon its past achievements and met new challenges. AASK has improved their trainings, augmented the staff, and increased outreach to families in underserved communities.  AASK strive to implement best practices in adoption and child welfare through their membership in California adoption and foster care associations.  The founding vision and pioneering spirit AASK serves them well as they work to find homes for the many children who still need them. AASK remains committed to offering post-adoptive support services, and continue to expand programming to meet the needs of their families.