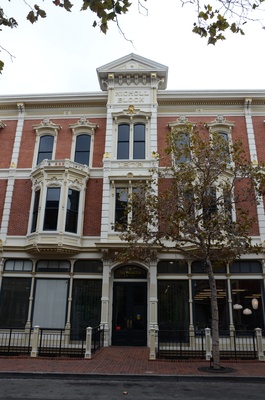 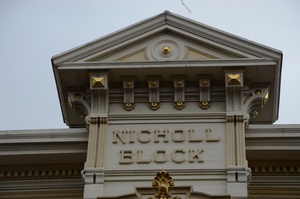 CC SA-BY Our OaklandOriginally named The Nicholl Block, The Arlington was built in 1877 by John Nicholl. Having migrated from Ireland in 1849, Nicholl’s great success as a farmer in Alameda County enabled him to finance the construction of what was noted as ”the first brick block on Washington Street.” When the building first opened its upper floors were occupied by the Nicholl House, later called The Arlington Hotel which the Oakland Enquirer called “one of the best family hotels in this City.” The Nicholl Block also housed The Grand Rule Bazaar (a stationery, book, and toy store), A. Jacobs & Company, Tailor and Hatter, and P.J. Nickolas Shaving Parlors. Later, the Oakland Tribune’s first offices were housed in this same building. One of the most striking features of The Arlington is the array of fanciful gargoyles that decorate its façade. These exquisitely designed creatures that “ward off evil spirits” were all individually reproduced and cast by hand, by artisans working right on the premises during the mid 1980’s renovation of Old Oakland. 1

The retail level was home to Pacific Coast Brewery for almost 30 years, and AIR Lounge, an upscale night club. The ground level is(?) also home to Bedrock Media and Comrade Agency. 1 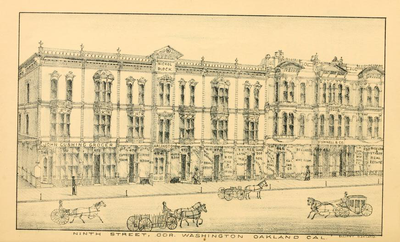 c.1885 from Oakland and Surroundings