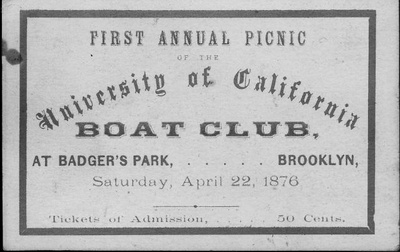 Badger's Park was a popular amusement park in Brooklyn (in what may now be considered the East Peralta neighborhood) built on the estate of Captain Thomas W. Badger. M.M. Wood's History of Alameda County 1 describes Capt. Badger as the hero of the disaster of the steamer Central America. Regardless, he was clearly a wealthy man.

The park sounds pretty amazing even by today's standards: gardens with exotic plants and animals, a restaurant which served "East Bay oysters, beef, wine, and steam beer", baseball games, a sailing pond, and trotting races. It opened April 14, 1872, reportedly to a crowd of 4,000 paying customers!

Note that at the time, the park was on what was then the shoreline. The trains ran on a trestle over the water. See the 1877 map below.

(this is a cc picture of Badger's estate. i'm not sure if it goes here or on the future page of badger)

"In the beginning of 1872 he commenced building his great pavilion, and preparing his grounds for the reception of the public, and in April of the same year, after an expenditure of from $40,000 to $50,000, he threw Badger's Grand Central Park open to the public. The result was an almost immediate success. The great dancing hall is in dimensions 200 by 85 feet, and substantially and conveniently fitted up with seats, galley, etc. The park comprises about ten acres of highly ornamented ground, being planted with rate trees and laid out in lawns and walks, since the first opening, the proprietor, every winter, has made expensive additions of various kinds, and now the park comprised, besides the pavilion, a large restaurant, dining room, ten-pin alley, museum, amphitheatre for games, menagerie, flower-garden, sailing-pond, etc., etc. The locality furnished beautiful scenic advantages, and is always worthy of a visit."

"...a place where the thousands of mind and body-weary denizens of San Francisco and Alameda Counties—school children and pleasure-seekers generally—might go and enjoy at will the free and pure air of the country mixed with the breezes that come, zephyr-like, up the winding creek from the bay and ocean beyond, and at the same time indulge in games and sports common to all places of resort of a similar kind."

Alas, the park didn't last long. By 1885 the area was "a tangle of railroad tracks" 2, and Badger's land was being sold for development. However, the exact closing date of the park isn't known as there were events there as late as 1890. 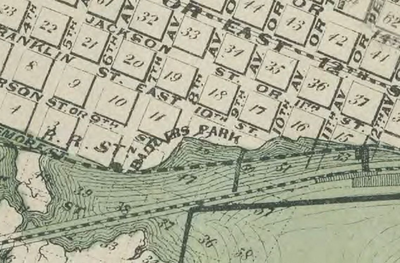 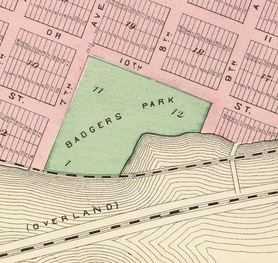 ...If you're interested in Badger's Park, you may be interested to learn more about Idora Park, another historic amusement park of Oakland.