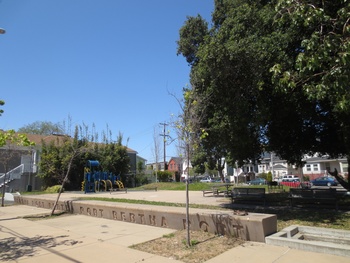 Bertha Port Park is a small City of Oakland park in West Oakland.

For many years, it had little but a worn statue of a dolphin and one tree in a dusty lot. Local resident Marilyn Reynolds began advocating for it to be renovated, and in 2005-2006 The Trust for Public Land's Parks for People - Bay Area Program worked to get it renovated. Now it has a play structure, picnic table, lawn, and more. The dolphin statue was covered in mosaics by Institute of Mosaic Art co-founder Laurel True. 1,2,3

It was named for Bertha Bastian Port and opened in 1947. Philip Joseph Port gave the land as a memorial to his wife Bertha with the proviso it be used as a park. It was originally built with slides, swings, picnic tables, and a climbing tree, designed with pre-schoolers in mind. 4,5 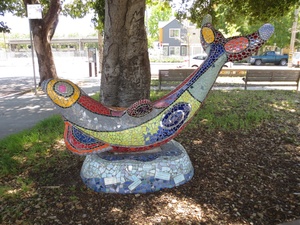