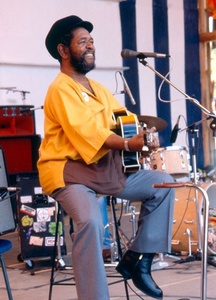 Walter Brown McGhee grew up in Kingsport, Tennessee. He contracted polio at the age of four, which left him with a serious limp and plenty of time away from school to practice the guitar chords that he'd learned from his father, Duff McGhee. Brownie's younger brother, Granville McGhee, was also a talented guitarist who later hit big with the romping "Drinkin' Wine Spo-Dee-O-Dee"; he earned his nickname, "Stick," by pushing his crippled sibling around in a small cart propelled by a stick.

A 1937 operation sponsored by the March of Dimes restored most of McGhee's mobility. Off he went as soon as he recovered, traveling and playing throughout the Southeast. His jaunts brought him into contact with washboard player George "Oh Red" (or "Bull City Red") Washington in 1940, who in turn introduced McGhee to talent scout J.B. Long. Long got him a recording contract with OKeh/Columbia in 1940; his debut session in Chicago produced a dozen tracks over two days.

Brownie McGhee died at Summit Hospital in Oakland, at the age of 80.