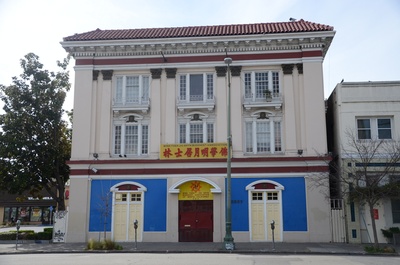 Jenny Lind Hall was a performance space with 250 seats and meeting hall, named for Jenny Lind, the "Swedish Nightingale", who was a highly regarded singer of the 19th century. It currently houses the Minh Yueh Jiu Shyh Buddhist Association. The building is at 2267 Telegraph (which was at one time 2216 Telegraph; the 1916 directory lists it at 2229 Telegraph).

1916 classified adThe building was designed by Frederick Soderberg and built in 1915. There were two spaces, upper and lower. Naturally, the local Vasa Order (a Swedish fraternal, cultural and educational organization) met there.

In the 1920s, various groups such as the Native Daughters of the Golden West (NDGW) used the hall for meetings. In 1921, the upper space was classified 'F' by the Local 6 musicians union (meaning gigs had to include at least 3 musicians), and the lower one classified 'G'. 3

In the 1930s, the Fellowship of Humanity (which now meets in Humanist Hall) met there.

According to Annalee Allen:

"During World War II, Jenny Lind Hall served as the USO for military personnel stationed on Treasure Island. The streetcar line along nearby Grand Avenue used to go back and forth from the base." 1

In the 1980s, the Koncepts Cultural Gallery hosted concerts there. 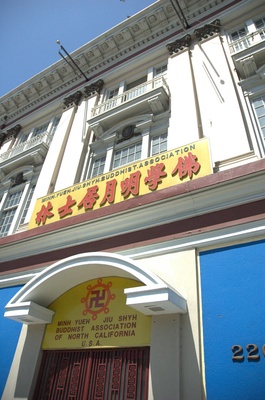