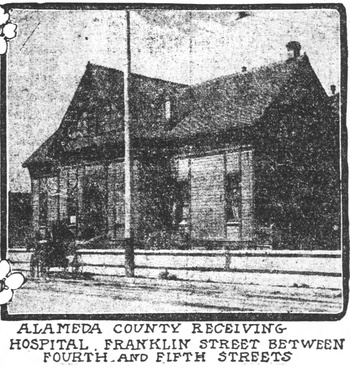 The County Receiving Hospital was a small emergency hospital on Franklin Street in the late 1800s and early 1900s. The hospital first opened in August 1880 in a temporary location in the basement of the Hall of Records. 6 Despite Highland Hospital opening in 1927, the receiving hospital was still open as late as 1928.

A report on the hospital gave the following numbers for 1904: 8

Not bad for a hospital with a capacity of 22 patients.

The front page of the June 8th, 1899 Oakland Tribune included the headline: "Wm. Keating Is Accused By Barnett". 10 William J. Keating was the warden of the "insane ward", and Isaac Barnett was a produce dealer who lived nearby. The charge? Keeping company with Barnett's 19-year-old daughter, Selma Barnett, and taking her to "questionable places." Barnett went to the hospital to get an explanation, and a fight ensued. Barnett said, "You have ruined my daughter." 14

The county board of supervisors investigated; Dr. Stratton testified in Keating's favor, and matron McDonald told of what she saw ("the most disgraceful affair." 14) When questioned by the board, Keating strongly asserted his innocence. The investigation continued, and witnesses were called. The sheriff noted that he had been unable to serve the subpoena for Miss Kittie Welch. 11

As the investigation went on,15 Keating eventually resigned his position. But William and Selma had the final say: they eloped to San Rafael and were married. 12 They went on to have ten children, and countless grandchildren and other descendants. Sadly, Selma died in 1915.

"Think of it! Cupid's germs have been located in the Alameda County Receiving Hospital, a place that seems immune from all germs with the exception of those directly pertaining to emergency cases of painful injuries. The quiet, innocent looking institution run by the county down on Franklin street, between Fourth and Fifth streets, is the home of the germ that sets the heart throbbing and creates business for the house on the same block, where the marriage licenses are procured." 16

Deputy sheriff John J. "Jack" Sherry's beat included the area of the hospital, and he would occasionally drop in to check on things. Auburn-haired nurse Martha Davis was often called to the bedside of patients, and the pair soon became friends. Over the years, it developed into more than friendship, and on June 12, 1907, they married. Hospital steward Harry Borchert was the best man, and Minnie Sutherland was the bridesmaid. Census data suggests the Sherrys didn't have any children, but remained together the rest of their lives. Jack died in 1938.

This was not the first case of the "germ" at the hospital. Dr. M. L. Emerson and nurse Alice Folger met while working at the hospital, and were later married. 16