Oakland has very cool decorative crosswalks in some places. We should describe them and photograph them.

The crosswalk project is described in detail in Oakland's Pedestrian Master Plan. Here are some highlights:

This page has a lot of detailed plans if someone wants to decode them.

Apparently there are some at the Coliseum BART station (I've never noticed them). 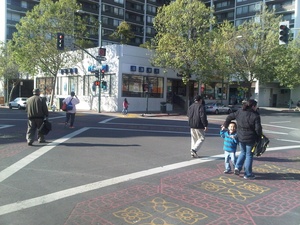 The Chinatown crosswalks were adapted from a Qing Dynasty manual of Imperial Court architectural design and decoration. They were installed at 4 major intersections: Webster, Franklin, 8th and 9th Street in a “scramble” format with additional diagonal crosswalks. These intersections created a cycle where all traffic stops and all pedestrians may cross (including diagonally). The intersections also feature bulbs that stick out from the corners and are painted a decorative red. This increases the waiting room on the sidewalks and shortens the distance to cross the street. The crosswalks were designed by FTS and completed in 2008.1 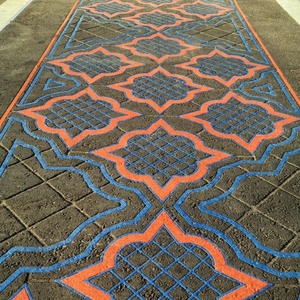 Crosswalk at Fruitvale and Pleasant by greenkozi 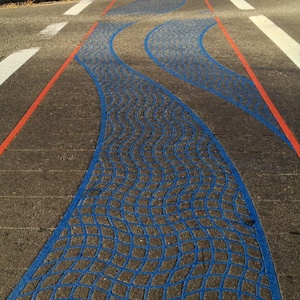 Crosswalk at Fruitvale and Harold by greenkozi