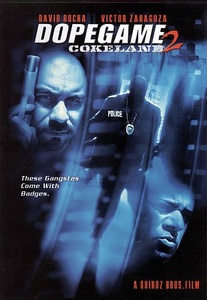 Dope Game 2 PosterDope Game 2 is a movie that came out in 2003 filmed by brothers Ed and Jose Quiroz. It is about crooked Oakland Police officers and drug dealers.

The movie is about 4 Oakland Drug and Gang Task Force officers who secretly control the dope game in Oakland. The leader of the task force is Officer Juan Diaz who, in the beginning of the movie, kills two drug dealers and takes their drugs. That's when they find out that the drugs belong to a local Mexican drug dealer named Miguel Durazo. They arrest several of Miguel's sellers, get to Miguel, and try to shake him down for money, but Miguel tapes their conversation. This leads to a showdown between the cops and Durazo and his gang.

The movie was loosely based on the Riders scandal at OPD and on several Oakland drug dealers.