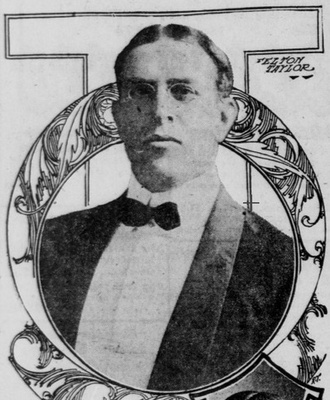 Felton Taylor (May 30, 1865–April 29, 1936) served on Oakland’s City Council in 1899. He had run as both Municipal League3 and Republican4 (the Municipal League appeared to nominate a mixed ticket).

Taylor was born in San Francisco in May, 1865. He attended the University of California (in Berkeley by this time) in the early 1880s.

Taylor’s one-year City Council term began in 1899. While on council he toured Lake Tahoe with the San Francisco Supervisors and reported on the Truckee and Yuba Rivers as potential water sources for Oakland. (Not a bad gig, especially in August.)5

He then went on to serve as tax collector and city treasurer. As tax collector, Taylor was in the awkward position of having to explain why Oakland residents paid high taxes. He explained that the city was very spread out which made maintenance expensive. He suggested the consolidation of the city and Alameda County, which clearly didn’t take.6

While city treasurer, Felton Taylor was a witness at the secret marriage of Hermann Tubbs, son of the well-known Hiram Tubbs12 and served as an honorary pallbearer when Hermann died in a carriage accident. Taylor’s position as city treasurer appears to have ended in 1905, when the mayor forced him to not seek re-election.7 The ‘scandal’ was that Taylor had deposited $130,000 of city cash in a bank instead of keeping it on hand. 10 Taylor claimed he hadn’t been provided with a proper vault at city hall. Although he apparently didn’t profit from this and it was a common practice at the time, the mayor made a big deal of it. A grand jury became involved, even interrupting a tour by the mayor to ask questions. 8 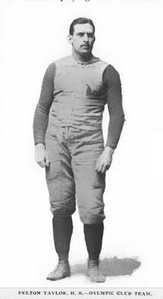 Taylor on the Olympic Club Team2

Taylor was the first recorded City Council Member to have been a football player. He played for the Olympic Club in the 1880s and was the oldest player on the team. He was also the president of the California Football Team (formed in 1886) and that same year captained the Reliance team.1, 11 His son Felton M. was also athletic, and played baseball while at Santa Clara College. 9

Mrs. Sereta Mahan Taylor was a member of the Fabiola Association which managed Fabiola Hospital in 1905, serving as assistant recording secretary. 13

By 1910 the Taylors had moved to San Francisco. Felton M. served as a sergeant in WWI and is buried in the Golden Gate National Cemetery in San Bruno.