Hiram Tubbs
from San Francisco Call, June 14 1897 Hiram Tubbs (1824-1897) was a well-to-do businessman who lived in East Oakland in the 1800s. He's known for creating the Tubbs Hotel, a luxurious hotel that stood at 5th Avenue and East 12th Street, and also as one of the founders of Mountain View Cemetery. He was born October 24, 1824 in Deering, New Hampshire to parents of Scottish descent.

In 1844 he married Abbie Ann Sianyan. They moved to Boston in 1845 where he ran a hotel. Abbie died in 1851; in 1852 he married Susan Ann Staniels. They came to California in 1853 aboard the steamer Tennessee, which wrecked outside the Golden Gate. There was no loss of life, and the passengers waded ashore.

He joined a ship chandlery business with his younger brother Alfred. After Hiram traveled back East to purchase machinery, they started what became Tubbs Cordage Company, which remained in business in San Francisco until 1962. 2

Tubbs was also involved in creating rail lines in the East Bay. According to the Lives of the Dead website, he created a horse-drawn street car system that ran up 12th Street to 13th Avenue, and for two decades was one of the only connections to East Oakland. The Oakland, Brooklyn and Fruitvale Railroad was also known as the "Tubbs Line".

In 1863, various civic leaders met at the home of Dr. Samuel Merritt where the idea of Mountain View Cemetery was first discussed. Hiram was one of the most supportive of the idea, and one of the first to build a family vault there in 1866.

Their son, Herman A. Tubbs, died unexpectedly in a carriage accident in Sausalito in 1902. It was then found out that he'd been secretly married to Mrs. A Jeffrys (nee Meader) of East Oakland.

Hiram and Susan had 9 children, 5 of whom survived into adulthood. Hiram died in 1897, and Susan died in 1905. They are buried in the family mausoleum at Mountain View Cemetery. 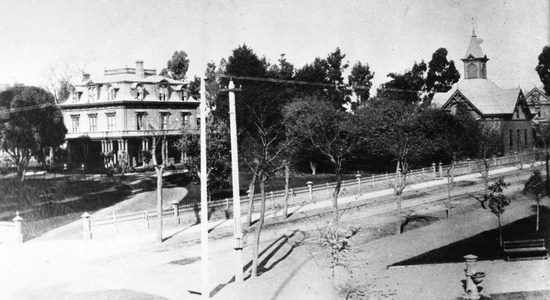 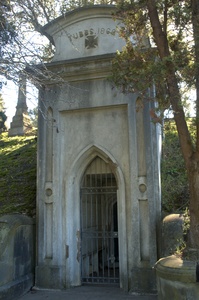 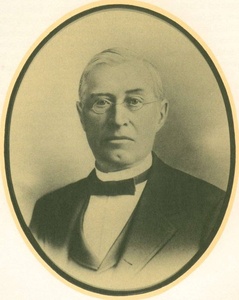 from Men of Rope: Being the History of the Tubbs Cordage Company