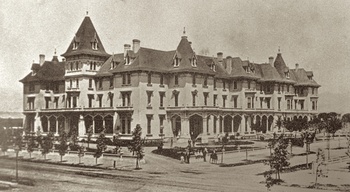 The 200-room Tubbs Hotel (also known as Tubbs' Hotel) opened in 1871 just east of Lake Merritt. The hotel was located on Washington Street, which was the main street of the then-separate town of Brooklyn, Built and owned by Hiram Tubbs (Tubbs Cordage Company) at a cost of $210,000, the hotel was situated on an entire 300′ block and surrounded by beautiful, landscaped grounds. Hiram’s father, Mical Tubbs, was its first operator. In late 1872, when Brooklyn was annexed into Oakland, Washington Street was renamed East 12th Street, and Patten Street to the north became 4th Avenue, and Strode Street to the south became 5th Avenue. The hotel was believed to be Oakland’s largest structure when Brooklyn was annexed into Oakland.

It appears that the hotel was initially open only for restaurant service during 1871, since the hotel placed numerous ads in the Daily Alta California in March and April of 1872 noting that the "New and Elegant Hotel" was "now open for the reception of guests." A similar ad was placed in the 1872 Langley Directory. 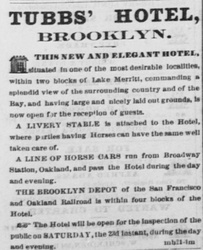 Hiram Tubbs hoped to lure an affluent crowd for vacations and temporary residences. As a little girl, Gertrude Stein and her family lived there for about a year before moving into their own home in East Oakland. Robert Louis Stevenson stayed in the hotel to be near his love interest, Fanny Osbourne. “Borax” Smith met his first wife there at a ball.

By the time it caught fire on August 14, 1893, the massive hotel had only 20 guests and reportedly had not turned a profit in years. When it burned, it was quite the spectacle: "The flames as they shot upward lit up the surrounding country all about, and the crowds of people flocking to the fire from every conceivable point were enormous." 3

At one point, the hotel was the city's largest employer of African Americans. 2

Although valued at $85,000, the building and its contents were only insured for $25,000 (by William Dingee.) Though not totally destroyed by the fire, the hotel was deemed too extensively damaged to justify rebuilding, so Hiram Tubbs, who lived across the street from the hotel, had the remaining structure razed. 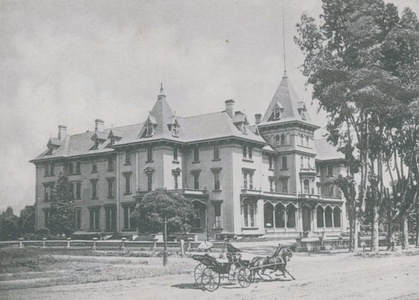 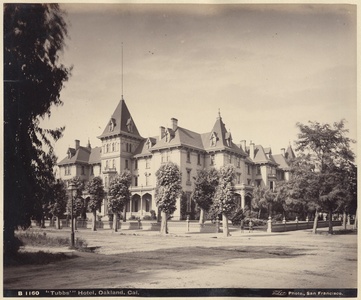