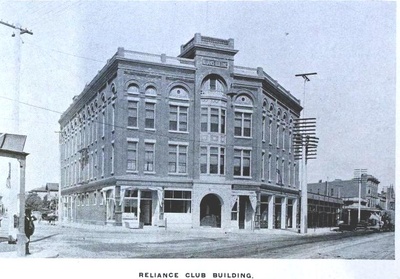 Reliance Athletic Club from
Alameda County, The Eden of the Pacific 2

The Reliance Athletic Club was a men's amateur athletic club, started in 1885 as a baseball and football club. The founders included Felton Taylor and A. P. Brayton, Jr, and the membership was a "who's who" of Oakland families. The club moved a number of times, and dissolved in 1910.

Although they started as a baseball and football club, they later hosted amateur and professional boxing matches, and took part in all sorts of track and field events. They even sponsored bicycle races at their track in Alameda, 13 and auto races in Emeryville. 12,14 The football team played Cal and Stanford, and played them multiple times in the 1900 season. 8

The club first met in Germania Hall on Webster below 6th Street.

The club opened new quarters at the corner of San Pablo and 17th Street in 1893 with a gala affair. 1Alameda County, The Eden of the Pacific says of it: "For sixteen years it has been the representative of clean, manly sports in Oakland." Although it describes it as being in the Heeseman Building, the photo shows the name Reliance Building at the top. The building was designed by Charles Mau.

At its annual meeting in 1904, finances were said to be much improved, in part because of debt reduction. Officials elected were: president, R. M. Fitzgerald; vice president, Felton Taylor; directors, P. J. Cadogan, G. Russ Lukens, W. B. Fawcett; P. H. Rosenheim, Paul J. Schafer. 5 Senator Lukens resigned, and Edwin Stearns, secretary of the Oakland Board of Trade, was elected to replace him.

In 1907, the club moved from its quarters in a national guard armory at 466 - 20th near Broadway and Telegraph to "the big pavilion adjoining the Piedmont baths," i.e., the former cable-car powerhouse. Arrangements were made so that club members could use the facilities at the baths. 4,6

The club continued to face financial difficulties, went bankrupt, and was dissolved in 1910. 3,10 The belongings of the club, including gymnastic equipment and trophies, were auctioned off. 16

The original building on San Pablo became the Reliance Theatre about 1916. 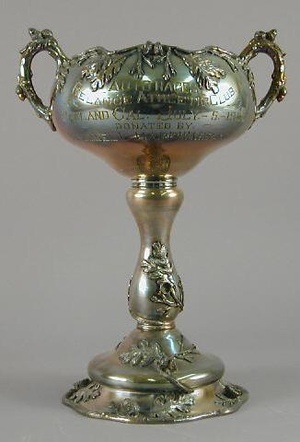