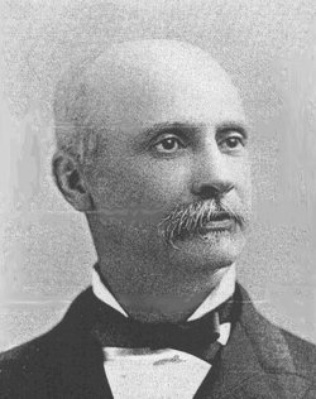 Pierre-Nicolas “Peter” Rémillard (April, 1837–August 4, 1904) was one the founders of the Remillard Brick Company.

Peter was born in April, 1837, in St. Valentin, Quebec, Canada. He came to California in 1854. After saving a "snug sum" of money working in mining, he moved to Oakland in 1861 where he went to work in a brickyard. Within 5 years he owned the brickyard, and opened an office at Clay and 2nd Streets, with a brick kiln in Brooklyn.

Rémillard married Marie Julienne Cordule Laurin (Rémillard) (June 15, 1846–February 1, 1934) in 1867, and they had three children: Philipe-Hilaire Rémillard, Emma Julia Rémillard, and Lillian Remillard (Dandini). One of the Remillard family homes is in Preservation Park, at 654 13th Street. Peter was one of the founders of the First Unitarian Church of Oakland (which was built with Remilllard bricks, of course) and an early member of the Athenian Club.

Son Philipe-Hilarie, (Philip) named for Peter's brother, died after falling from a fire escape at Delmonico's restaurant in San Francisco. He had stepped out for fresh air, and fell through an opening in the fire escape. He survived the fall, but died a few days later. 2 He was vice-president of the Remillard Brick Company at the time. A funeral was held at the Remillard House, and Philip was interred in Mountain View. Daughter Emma Julia graduated from Snell Seminary in 1887.

Peter died suddenly August 4, 1904 of a heart attack. He and many members of the Remillard family are buried in the family mausoleum in Mountain View Cemetery. The mausoleum was built by Cordule after Peter's death, for $9,330. 3

His brother Edward and his family is in Saint Mary's. 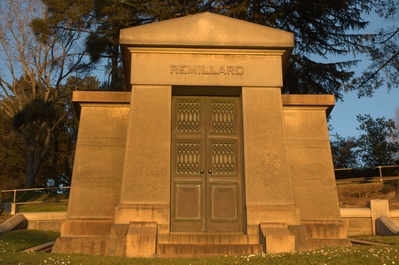