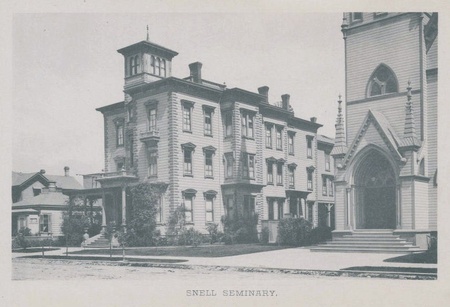 Snell Seminary was founded by Mary E. Snell in the 1870s as a school for young women. Husted's directory of 1892 list the seminary's address as 568 - 12th Street in Oakland, with Richard B Snell and Miss Mary E Snell serving as the principals. 3 In 1895 the school moved to Madison and 14th. 7

The seminary was considered one of the best known and most fashionable schools on the Pacific Coast. 2

On July 31, 1896, the San Francisco Call has an advertisement for the Snell Seminary, a "Boarding and Day School for Girls; pupils prepared for college and university; next term opens MONDAY, August 3, 1896. Mary E. Snell, Principal." 5  The address of the seminary is listed as 1213 Madison Street, Oakland.

In 1880 Mary Snell's sister Margaret Snell joined her in reorganizing the school. 1 Margaret A. Snell left Snell Seminary and went to Boston in 1883 to attend medical school.  She returned in 1886 to establish a medical practice. 1,4 Their sister Sarah served as a house mother. 4

Mary Snell reopened the school with her sister Mrs. Edna Snell Poulson on Channing Way in Berkeley in 1901. 2

Snell Seminary in Berkeley ceased operation after the death of Edna Snell Poulson on January 28, 1912. 4 Also, in 1912 the former Snell Seminary site in Oakland was the current location of the Orpheum Theater on 12th Street, 4 "then known as Central Avenue." 6

On May 4, 1950, the Oakland Tribune announced that the Alumni Association of the old Snell Seminary, founded in Oakland in 1878, will hold its annual May luncheon at 12:30 p.m. Saturday at The Virginian Restaurant, 60 Grand Avenue. 6 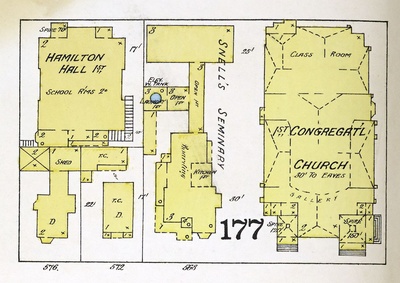