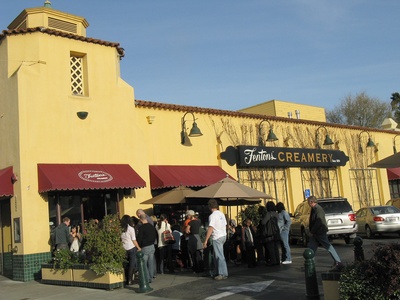 Fentons Creamery is a beloved ice cream parlor and restaurant in the Piedmont Avenue neighborhood of Oakland, California. Founded (as an actual creamery, not an ice cream parlor) in 1894 by Elbridge Seth (E.S.) Fenton, on the corner of 41st Street and Howe Street (where the neighborhood Post Office is now located), it moved to its current location at 4226 Piedmont Avenue (a former Safeway store) in 1961.

The manufacturing of ice cream is credited to E.S.’ grandson Melvin, who as a boy persuaded his grandfather to produce ice cream. Melvin grew up to also be an ice cream man and designed some of Fentons’ signature flavors, like Toasted Almond and Swiss Milk Chocolate.

E.S. Fenton had 13 children, who all worked for the family business and when he retired, three sons took over operations of the Creamery. When the three sons retired, they left the Creamery to eight of E.S.’s grandchildren. 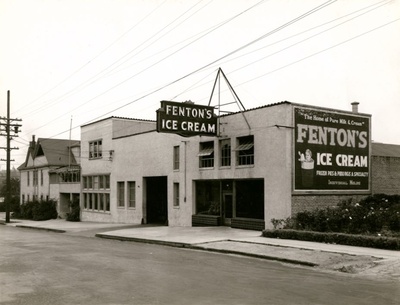 "In 1894 Elbridge Seth (E.S.) Fenton founded our Creamery in Oakland, CA. E.S. Fenton established the family business at 41st and Howe Street, where it stayed for 67 years.E.S. loved kids, so much so that he had thirteen of them and they all took part in the family business! He eventually passed the operation on to three of his sons who ran the Creamery until they retired. They then passed the family business on to eight of their children.Melvin Fenton, E.S.’s grandson, is credited for persuading his Grandfather to produce ice cream when he was a young boy. Melvin grew up to become an ice cream maker and is responsible for the creation of our most famous flavors - Toasted Almond, Swiss Milk Chocolate and Rocky Road. The family added the restaurant and soda fountain in 1922.The ice creamery portion of the business became the prize of the Fenton family's dairy operation and continued in the family until another dairyman, Bill Morison, convinced the Fenton’s to sell to his employer, Golden State Dairy (soon to be Foremost). Morison happened to be married to Virginia Fenton, the granddaughter of Elbridge Fenton. So, the Creamery changed ownership but still remained under the direction of the family for a while.Foremost discontinued the full dairy operation at Fentons in 1961 and moved Fentons Creamery, the restaurant and ice cream production facility, to 4226 Piedmont Avenue in Oakland. Foremost ran Fentons Creamery as its marquee business for many years until deciding to get out of the Dairy industry all together.In 1987, Scott Whidden, a third generation Oakland-native and ice cream maker since the age of sixteen, purchased Fentons Creamery from what was by then Foremost-McKesson. Fentons Creamery. (copied from the Fentons website)

My family connection is my aunt who worked for Golden State and retired from McKesson many years later. She also lived very close to the Piedmont Ave store. As a kid I was sure she milked the cows! She worked in accounting. It holds many family memories." -- Robin Williams Rositani

Fentons candy maker George Farren was said to have created a rocky road candy bar with walnuts and invented the Rocky Road ice cream flavor by adding it to chocolate ice cream. He was friends with William Dreyer and Joseph Edy of Dreyer’s Grand Ice Cream who invented a similar Rocky Road ice cream flavor, but used almonds in their version, instead of walnuts. Following the 1929 Wall Street crash, Dreyer and Edy named their flavor Rocky Road to cheer up folks during the national difficulties.

In the 1950s the Fenton family was convinced by Bill Morison, a dairyman married to Virginia Fenton, one of E.S. Fenton’s granddaughters, to sell the Creamery to his employer, Golden State Dairy. Golden State Dairy later became Foremost Dairies, and then merged with McKesson in the 1960s to form Foremost-McKesson. At one point Fentons Creamery was owned by Foremost-McKesson, then the investment group Wallner and Associates in San Diego.

Late on the night of November 21, 2001, while driving home after 1:00 a.m., former Israeli paratrooper Paul Berman and his wife noticed suspicious activity in the Fentons parking lot. Employees were loading the jukebox and three gelato machines, along with $5,000 in cash, into a U-Haul truck. Berman called the police, who thought everything was normal, but upon coming back to the scene a few minutes later, saw the Creamery had been torched. The interior suffered extensive fire and smoke damage before being extinguished and the three employees involved were arrested on the spot. The day and night supervisors (Fernando Menses and Martha Pena, both 19) confessed to the arson and robbery, and went to prison, and the employee who was a 16-year-old minor served two months in juvenile hall.

Fentons Creamery was closed for 19 months amid wide-spread media coverage and a swirl of community support and neighborhood rumors. Whidden received $1.5 million from the insurance policy and the building’s landlord $1.35 million, along with $800,000 in ‘gifts and loans’ from the community, which paid for the complete renovation of Fentons.

Fentons was featured in the 2009 animated movie Up. Pixar Director Pete Docter, producer Jonas Rivera, and other employees are regular customers to Fentons. 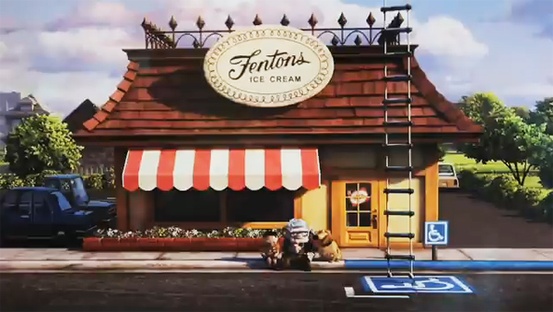 Fentons Ice Cream parlor, a tribute to Fentons Creamery, as featured in the Pixar movie Up

Fentons was the recipient of the East Bay Express Best Dessert Place Readers' Poll Award in 2014.