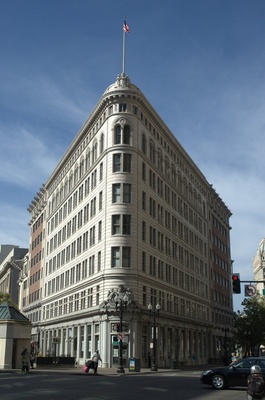 A miniature of the Flatiron Building in New York City, the shape of the building was determined by the radiating street pattern. The First National building is located at 1401 - 1419 Broadway, (150 Frank Ogawa Plaza) Oakland, California.

The building is an eight story and basement Beaux Arts Classical flatiron bank and office building occupying the prominent gore corner of Broadway and San Pablo Avenue. It is reinforced concrete with rusticated white terra cotta cladding, in a three part vertical composition with articulated end bays. The design is at least partly inspired by New York's 1902 Flatiron Building. The high base of the building originally had giant columns and monumental entries but has been entirely remodeled except for the richly sculptured clock and figures above the corner entrance, which was originally flanked by columns. The transitional second level has paired windows in a more lightly rusticated wall. The capital story has paired arched windows set within larger arches. The top story is a band of small square windows and panels treated as a frieze below the wide modillion cornice and corner crest. Closed for years following the 1989 earthquake, the building was rehabilitated in the late 1997 for city offices.

The First National Bank of Oakland was founded in 1874 and was located at 10th and Broadway until it occupied the present structure in 1908 - part of a general northward move of Oakland's business and financial district. In additional to the bank, the building was to house a luxurious basement restaurant and upper floor medical and dental offices. Architect Llewellyn B. Dutton originally came to San Francisco to open a western office for Daniel H. Burnham & Co., architects of the New Yor Flatiron Building. In Oakland he also designed another early skyscraper, the First Trust and Savings Bank Building at 1540-50 San Pablo Avenue (1913-14). Located at the important intersection in the city and across from City Hall, the flatiron Broadway Building is a handsome and distinctive example of its style and type, and an image deeply associated with the city.

This historic building is #8 on the list of District Contributors for the Downtown Oakland Historic District Registration Form. 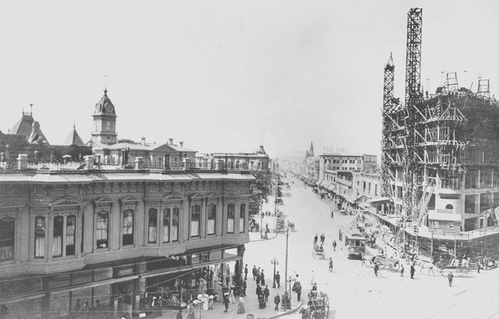 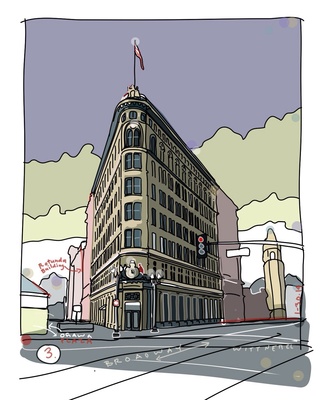