George Mansfield Blake (March 16, 1821-October 16,1875) was a prominent figure in early Oakland. He was a landowner and held a variety of positions in the early life of the City. He was elected to the first City Council in 1854 and served again in 1862. He was an original signer of Oakland's "muster-roll."  Blake was an early District Attorney and Judge in Oakland5, was on the first Board of Education and was a charter member of the Live Oak Lodge in 1870.1 George Blake was Mayor FK Shattuck's brother-in-law2 as he married his sister, Millicent in New York.4 He was also a business associate of Mayor Carpentier.

Millicent Kittredge Blake, wife of George M. Blake and sister of Francis Kittredge Shattuck, was an early educator in Oakland who established the first school for girls, the Oakland Seminary for Young Ladies.

When he passed away in 1875, the City Council passed the following resolution:

WHEREAS, By the grim fiat of the inexorable foe our friend and predecessor George M Blake, who once graced a seat in the Council of this city and by the vigor and force of his intellect materially assisted in the conduct of its affairs for a term of years with a degree of high honor to himself and universal satisfaction to the people, but in accordance with a universal law he has yielded to the common fate of man and passed away from earth amid the full luster of his years, his virtues and his usefulness; and

Whereas, In his social and personal character he was ever conspicuous as the kind and devoted husband, faithful friend, exemplary citizen and honorable gentleman, associating himself with every benevolent and charitable enterprise, standing forth prominent among men as Saul stood among the Prophets, as a man whose philanthropy was co-extensive with the spontaneous emotions of his noble and generous heart, a man who studied diligently in the aggregate the greatest welfare of his own race, and in the detail the greatest comfort of those in his immediate surrounding; who to his friends and such were all with whom he came in contact, never ceased to mae himself a source of cheerfulness and joy, imparting to them his magnetic influence, his genial spirit, his grateful pleasantness and warm emotions; therefore be it

Resolved, that in his departure the City Council and the whole community in which we live have sustained a common loss, at a time too when Oakland can illy [sic] afford to part with any of her venerable pioneers who one by one are receding from our midst and whos places it is most difficult for the survivor to fill.

Resolved, That while conscious of the vanity of human solace in the midst of their profound bereavement, this Council but deem it proper to tender to the surviving wife and relatives of the departed our deep heartfelt sympathies, knowing that He who tempers the wind to the shorn lamb will give them strength, fortitude, and solace in this apparent dark and dismal hour.

Resolved, That the above be placed on the records of this Council and a copy be sent to the bereaved widow with the seal of the city attached.3

George M. Blake died in 1875 in Trinity County, and is buried in Mountain View Cemetery along with his wife and the Shattuck family. 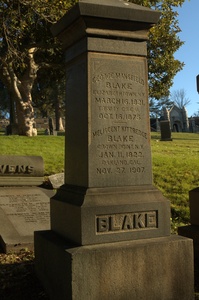