Bloggers, the Oakland Wiki, and many internet sources put a LOT of faith in the Greenstreets map as their single source for locations of Oakland neighborhoods.  Just sayin'.

I think it's a shame that all these different sources come down to one fairly arbitrary choice of map (historical accidents and lack of other options seem to have been the main driver for why this is the most-used map). At least we figured out that this map was the source of so many other maps - just figuring that out was pretty much a complete pain. But it doesn't have to be this way! Let's improve the neighborhood boundaries! Move them around! They are up for negotiation! - mk30

Just sayin', but not accurate. The OMCA map was a major source for my map, but not the only one: some neighborhoods were based on textual descriptions from other sources; Downtown vs. Uptown was based on a discussion at the DTO blog; Glen Echo was based on comments from residents. But as mk30 says, they are up for negotiation, and the wiki borders have been changed from my version in some cases. - Gene 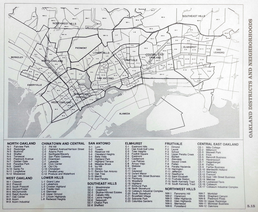