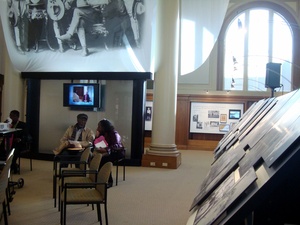 Henry Williams at the African American Museum and Library on Feb. 9, 2013 (AAMLO open house event) during a screening of a video of his 2010 AAMLO fashion show."I wanted to be a world-renowned designer, which was unheard of for a black man, but it didn't hurt to dream." - Henry Delton Williams

Henry Delton Williams is an Oakland fashion designer who is best known for designing for many Motown performers. Throughout his career he has been influenced by the Civil Rights movement, the Black Panthers and black power, jazz, and African culture. Williams now runs AFAR Clothing Design. (AFAR stand for "American Fruit with African Roots")

The African American Museum and Library holds a collection of Williams' designs, which were on exhibit from Jul-Oct, 2010. Also in 2010, the Museum organized a fashion show of Williams' designs with many amateur models from the community participating.

In the 1960s, Williams ran Original Brothers clothing on the corner of 18th Street and San Pablo Avenue. 1