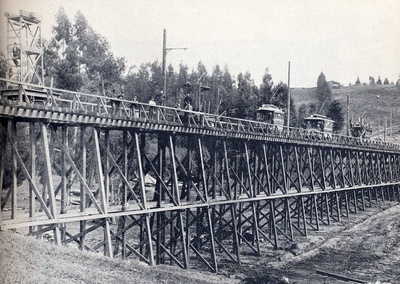 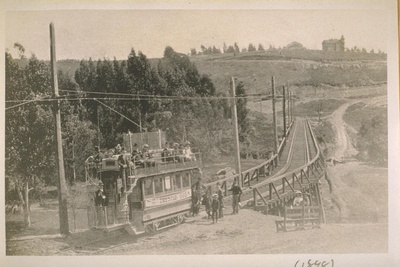 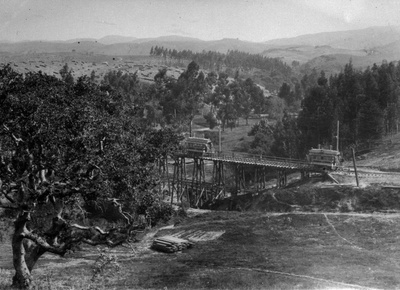 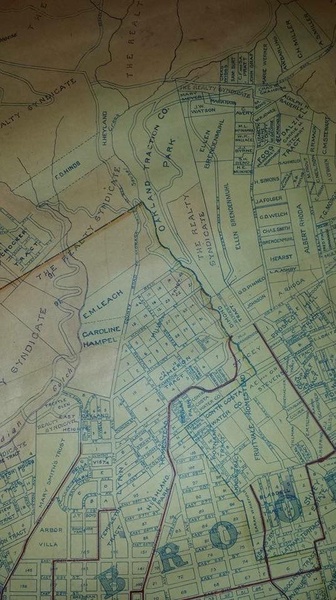 The Indian Gulch Trestle transported people by trolley cars over to what we now call Trestle Glen, but in the early history of Oakland was an area in the countryside for picnics. The trestle was built in 1893 by Borax Smith and dismantled in 1906 when the line was rerouted. The streetcars came up Park Blvd., and the trestle ran from above where Holman Road now crosses Grosvenor Place to Grosvenor and Underhill Road. The primary destination was Sather Park, which was on the land of Jane Sather. Mark Twain was reportedly a passenger on the maiden voyage of the streetcar. The new rail line ran along Trestle Glen Creek, which was named Indian Gulch by early settlers after the Huchiun village that was located near the present-day intersection of Lakeshore and Trestle Glen Road. 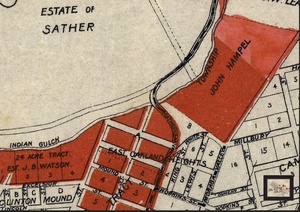 [That description doesn't make any sense to me (NAParish), even after I made a small edit to match the info from the Lakeshore Highlands Ass'n and their sign.  Holman and Underhill are only separated by about 500 feet, without much of an elevation change between them, and the trestle was much longer than 500 feet.  Also, this 1963 AC Transit publication says the trestle bridged "Indian Gulch enroute from upper Park Blvd. to Longridge Rd."  It also says it lasted until 1904, although I found a September 1904 Trib article about a proposal to purchase some of the Sather Property for parkland that refers to a "Trestle 80 feet high" running through the park, implying that the trestle was still in use in late 1904, and also implying that there was a fairly serious elevation change.  See more on the PDF => Sept 1904 Trib.pdf . I would believe this page, which says the trestle started at Grosvenor and Park (BTW, then known as 4th Ave), but doesn't say where the other end was located.] [Based on the photo, if Gene estimates very generously he gets a height of 50' at the highest point; more likely it's closer to 40'. Also note that it doesn't go to the top of the far hills.]

[Note also the 1905 map excerpt, which shows a streetcar line going up 4th Avenue (now Park Blvd) but ending before Indian Gulch. That is consistent with the AC Transit publication, which stated that the line only lasted until 1904.]