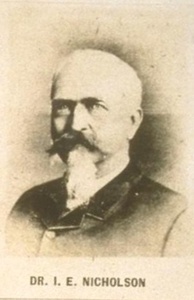 Dr. Isaac Emmet Nicholson, Sr. (c.1828 – April 28, 1894) was a doctor trained at the Louisiana College of Medicine in New Orleans. When the Civil War broke out, he enlisted as a surgeon in the Confederate Army. He came to Oakland in 1868. 3

Nicholson, Sr. was physician for the Deaf, Dumb, and Blind Asylum in Berkeley, as well as having a private practice.

His first wife passed away at a young age before bearing any children, and he then married Mary Belle Bauhaum (or Bonham) (Nicholson), and they had seven children. 4 The family lived at what was then identified as 626 - 8th Street at Grove (now MLK), and later addressed as 644 - 8th Street.

An obituary for Isaac, Jr. says Isaac, Sr. was one of the founders of Fabiola Hospital. 7

A charter member of the Athenian Club, he was active in club affairs until he contracted tuberculosis. He traveled to Hawai'i in hopes of recovering his health, but died in Honolulu. 3 His remains were returned to Oakland and interred in Mountain View Cemetery.

Nicholson, Jr. was a graduate of Oakland High School, class of 1888, and spent some time studying at what was then referenced as the Medical Department of the University of California, now known as UCSF. 2,4,5 He received the rest of his medical training in the east. 1,2

He married Cora Harvey (Nicholson), and they had two daughters.

He died at 34 of typhoid. His remains were cremated.

NB: In Hella Town, p.83, Mitchell Schwarzer quotes "The Growing Popularity of Automobiles in Oakland" (Oakland Enquirer, November 7, 1903) which refers to a Dr. L.E. Nickolson. As there were no Nickolsons listed in the 1903 Oakland directory, 8 I believe the Enquirer made several typos, and the person quoted was Dr. I.E. Nicholson, Jr. If correct, Dr. Nicholson, Jr. was one of the earliest automobile owners in Oakland.