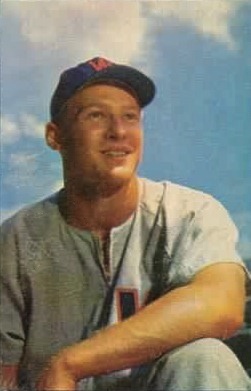 Jensen in 1953
public domain via WikipediaJack "Jackie" Eugene Jensen (March 9, 1927 – July 14, 1982) was a MLB player and college baseball and football player who lived in Oakland. He is one of two people to play both in the Rose Bowl and the World Series. He helped Cal win the inaugural College World Series over a team from Yale which included future president George Bush.

Jensen was born in San Francisco, but went to high school at Oakland High School. He served in the Navy towards the end of WWII, then went to UC Berkeley (Cal) for college.

In 1949, Jensen married his high school girlfriend Zoe Ann Olsen, the silver medalist in diving at the 1948 Summer Olympics, to great fanfare in Oakland. They had three children, Jon Jensen, Jan Jensen, and Jay Jensen, but divorced in 1963. They tried a remarriage the next year, but divorced for good in 1968.

In 1949, Jensen left college after his junior year to sign with the Oakland Oaks. After playing for the Oakland Oaks in 1949, his contract (and that of Billy Martin) were sold to the New York Yankees. His career probably reached its peak with the Boston Red Sox in 1954–1959. During that period, he made the MLB All-Star team 3 times, was AL batting champion 3 times, won the Gold Glove in 1959, and was American League MVP in 1958.

Jensen's baseball career was cut short in part by deathly fear of flying that grew worse despite various attempts at treatments. He retired unexpectedly in 1960 as MLB was expanding westward and the need for flying increased. He tried a comeback in 1961 and tried hypnotherapy, but after a less than stellar season, retired for good.