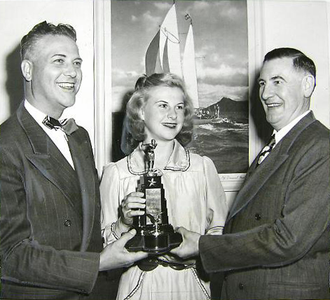 Olsen with a trophy at Athens Athletic Club
from OMCA Collections, gift of ANG NewspapersZoe Ann Olsen (born February 11, 1931) is a former Olympic diver who lived in Oakland.

Already a national sports hero from her 1948 Olympic win and storybook romance with Jackie Jensen, she re-captured the nation's attention for the 1952 Olympics. After having the first of their 3 children in 1950, she decided just two weeks before the Olympic trials to try out again for the team. 1 She made the team, and won the 3m springboard diving bronze medal in the 1952 Olympics in Helsinki, Finland.

Olsen was born in Iowa to Arthur Paul Olsen and Norma Olsen. After her father joined the Navy and was stationed at the Alameda Naval Air Station, the family moved to Oakland. Olsen attended Oakland High School.

On October 16, 1949, Olsen married her high school boyfriend, baseball and football player Jackie Jensen. Over 1,500 people attended their wedding at First Presbyterian Church, selected in part because it was the largest church in Oakland. The reception was held at the Athens Athletic Club, and although only 400 people were invited, over 1,000 people showed up. 1

"The Golden Couple" had three children, Jon Jensen, Jan Jensen, and Jay Jensen, but divorced in 1963. They tried a remarriage the next year, but divorced for good in 1968. 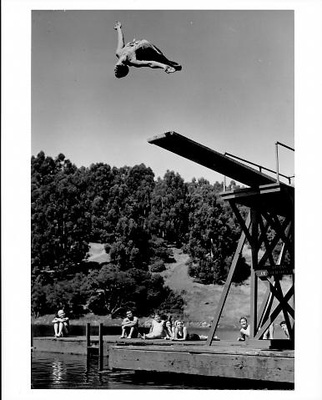