James Henry Pedgrift (February 24, 1877 – February 10, 1948) was a contractor and builder. He was part of Schnebly, Hostrawser, and Pedgrift before starting his own company. Pedgriftsidewalk stamps in Oakland bear dates from 1930 to 1940.

Pedgrift was born in England, and his family immigrated in 1882 or 1883. He married Ina Belle Ormsby (Pedgrift) (1876-1964), the younger daughter of Elon Ormsby, one of the first professional photographers in Oakland. They had 3 children: Philip James Pedgrift, Delmore George Pedgrift, and Marjorie Melissa Pedgrift.

Pedgrift died in 1948 after a long illness. He and Ina are buried in Mountain View Cemetery in the Ormsby lot. 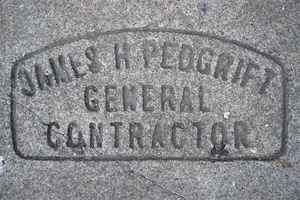