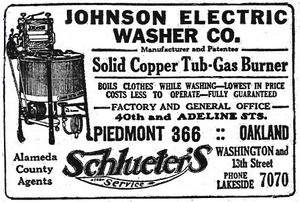 The Johnson Electric Washer Co. was a major manufacturer of electric washing machines on the west coast in the early 1900s. The company held several important patents related to their designs. Their factory building at 40th and Adeline still stands.

The company was founded in 1902 by Chris P. Johnson (the P. was added to sound more business-like.) Johnson had little formal education, only being schooled through 3rd or 4th grade. He developed the idea for the washing machine while working at a blacksmith's in Newcastle, CA. The family was in San Francisco looking for a location for a factory when the 1906 earthquake struck, and Johnson's grandson reports "my mother had clear memories of wandering the streets of SF with my grandfather dragging a large trunk with all their belongings. They had to leave and head back home [to Newcastle]." They returned to San Francisco a few years later.

A 1915 issue of Electrical Review states:

"The Johnson new improved electric washer is generally recognized as one of the most satisfactory washing machines on the market. In its design many small, but important labor-saving details have been incorporated and the efforts of the manufacturer have all been concentrated on the production of a simple, efficient machine that will do the family washing in the shortest possible time with the least expenditure of the housewife's energy." 2

The Oakland factory at 40th and Adeline was built to Johnson's specifications in 1919 and operations moved there in 1920. The building covers approximately 33,000 square feet, and had a state-of-the-art machine shop. While ads and articles list the factory and offices as being in Oakland, in fact part of the building is in Emeryville.

The company including the factory was sold to Frank Schulyer in 1922. He consolidated his manufacturing in Berkeley into the Oakland factory. The Apex company of Ohio wanted western manufacturing, parts and distribution, and purchased the company in 1929. 3 The washers were known by "Johnson-Apex", then "Apex-Johnson", and finally by 1933, "Apex". 1 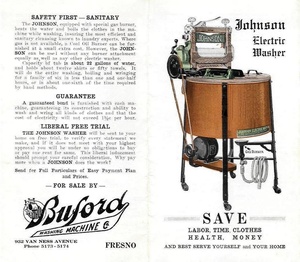 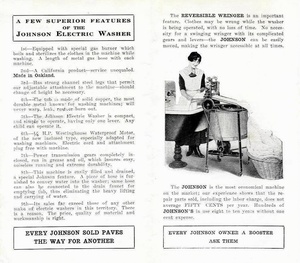 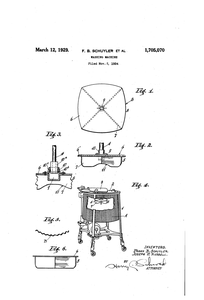 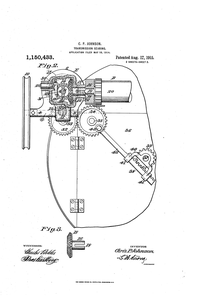 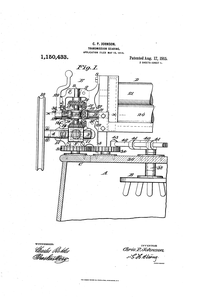