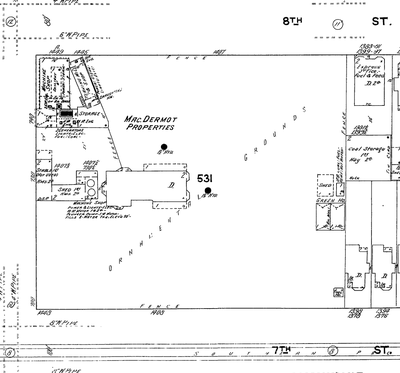 The MacDermot family was a wealthy society family whose estate and mansion was at 1407 8th Street in Oakland. The estate was the block bordered by 7th, 8th, Center and Cypress (now Mandela Parkway) Streets. The house was built before 1889. (3. tract map shows the house was there in 1876) One source states that the estate was razed in 1942 in order to construct a housing project on the site for "newly arrived war-industries workers," although the source also refers to the "McDermott" estate, so its accuracy may be questionable. 1

Charles Francis MacDermot (1834-1898) immigrated to the United States from Ireland In the 1860s. He was married to Flora B. Main. They first lived in San Francisco before moving to Oakland. He was a merchant and later an insurance director at California Insurance Company, which was founded by his father-in-law, Charles Main. Charles Main was founder of the San Francisco pioneer saddlery and harness firm Main & Winchester; Main streets in San Francisco and Oakland are named after him.

Louis Main MacDermot (1877-1948) was a railroad enthusiast. He created the 19 gauge Overfair Railway for the 1915 Panama-Pacific International Exposition in San Francisco. He was married to Hortense Josephine Paul (?-1946), of Boston, in 1907. He spent his life and inherited fortune designing and building steam locomotives and died in poverty. The inherited fortune was split in a messy court battle, and "Louis was left with the old house, 54 acres of Piedmont Park, a concession from his mother’s bad loan to real estate developer Frank C. Havens, and the section of Alameda Point bearing his grandfather’s name. The grand winner was Alameda County with the largest inheritance tax purse ever collected." 2

Mary W. MacDermot (1883-1957) was married to Charles A. Crawford and later married W. Ruddle Browne. [ below refers to Mary as his older sister, and says she was a famous author 2.  She lived in Kent, England for many years and wrote books under the name M. Mac Dermot Crawford (currently on Amazon as Mary MacDermot Crawford): Madame de Lafayette and her Family, The sailor whom England feared, being the story of Paul Jones, Scotch naval adventurer and admiral in the American and Russian fleets, and Peeps into the psychic world; the occult influence of jewels and many other things.