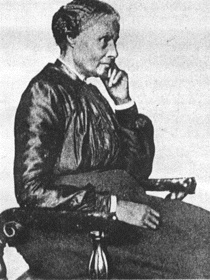 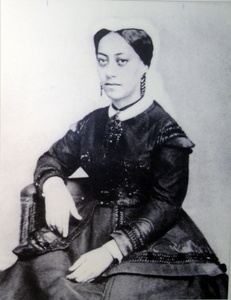 Mary Ellen Pleasant? 2Mary Ellen Pleasant (August 19, (1814? 1817?) – January 4, 1904) was an entrepreneur of partial African descent who furthered the cause of abolition with the fortune she earned through various business investments and ventures.

By some accounts (including Mary Ellen herself) she was born Mary Ellen Williams on August 19, 1814 in Philadelphia, Pennsylvania, to an African American mother and Louis Alexander Williams, a well educated merchant from the Sandwich Islands (now known as Hawai'i). 3

Other accounts of her early life list the exact year of her birth as a slave in Augusta, Georgia as uncertain, in 1827 Mary Ellen became a bonded servant to 'Grandma Hussey', a Quaker storekeeper in Nantucket, Massachusetts. She worked off her indentured servitude and became a lifelong friend of the Hussey family, who were prominent in the abolitionist movement.

With the assistance of the Hussey family, in the 1840s Mary Ellen began a career as assistant to a Boston tailor, and also obtained a paid position as church soloist.

Passing as white, Mary Ellen's first husband was James Smith, a wealthy plantation owner who was also of partial African descent and passing as white. With Smith's support, she worked as a 'slave stealer' transporting slaves through the Underground Railroad to destinations as far away as Ohio and Canada. Following James Smith's death four years after they married, she continued her work with funds inherited from Smith.

Around 1848 Mary Ellen married John ("J. J.") James Pleasant(s) and together they continued to free slaves under the plans of James Smith. After drawing the attention of slave catchers, the two moved to New Orleans.

Mary Ellen set off for San Francisco during the Gold Rush and arrived by boat in the city sometime in April 1852. Her husband J. J. Pleasant had already arrived before her and had written to Mary Ellen that California would be a good area from which to conduct the activities of the Underground Railroad.

Again while passing as white among European American society and using the name 'Mary Ellen Smith,' she ran eating establishments which catered exclusively to men. Benefiting from important financial information gleaned while catering to the rich and powerful leaders of the city, she shrewdly employed a young Bank of California bank clerk named Thomas Bell to invest on her (and his) behalf based on her financial tips. By 1875 it was estimated the two had amassed approximately $30 million.

In 1877 J. J. Pleasant passed away from diabetes, having had an extensive career 'stealing slaves' and conducting civil rights legal battles in the courts from the 1860s to the 1870s.

In 1889 she purchased a small ranch in Fruitvale near the intersection of East 14th Street and 22nd Avenue in Oakland. An article in the Oakland Enquirer indicated that Pleasant "is much the wealthiest colored person in this city; in fact she is reputed to be worth two or three hundred thousand dollars. She moved to Oakland not long ago and bought a fine house in the Twenty-Third Avenue district. Since then she has made one or two other small investments in Oakland property." 2

Mary Ellen Pleasant lost her fortune in the 1880s and died in poverty. She is buried at the Tulocay Cemetery in Napa, California with the simple inscription “She was a friend of John Brown” next to her name.

There is an award winning film on her life "Meet Mary Pleasant, Mother of Civil Rights" which was shown at the Oakland Museum on January 16, 2011. On February 5, 2011 the African American Museum and Library presented an exhibit entitled "Mother of Civil Rights" and a lecture "Mary Ellen Pleasant: A Friend of John Brown" by historian Susheel Bibbs.