Mutual Creamery Co. was a dairy (and later grocery) at 3979 Piedmont Avenue, first opened to sell milk, cream and other dairy foods at cash and carry prices. It was started by Emil A. Hagstrom, who came to Oakland in the spring 1917. He started with only $75 capital, part of which was acquired by pawning his watch. Mrs. Hagstrom, his wife, was the first clerk and opening day receipts were $15.28.

After a year a second store was opened and then a third. A limited stock of groceries was added to the first stores, as convenience to the customers. Later bakery goods were stocked. Eventually the stores were made into small markets with the addition of fruits, vegetables and meat counters.

A few years later Hagstrom bought a small creamery. In 1923 a new facility was built to to act as a creamery, bakery and distribution center for all his stores. The was located at 425 East 11th Street, Oakland. 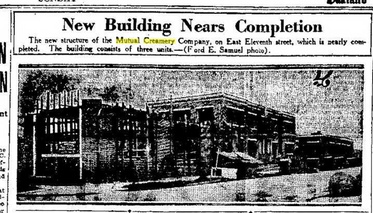 The new plant consists of separate units: Creamery, bakery and grocery warehouses. The creamery will be equipped to distribute and the handling of 50,000 quarts of milk a day and making of Ice Cream. A two story modern baking plant and retail space for a Mutual Store, on site. 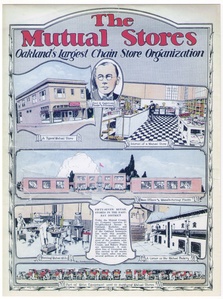 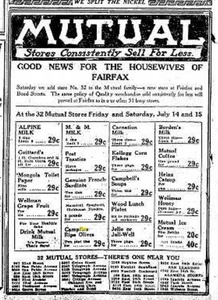 The business prospered, additional stores were open in almost every neighborhood including a one in San Francisco. In May, 1929 with a chain of more than 300 stores. Hagstrom sold his company MacMarr Stores that was doing business all through the west. He was kept on as Division Manager at MacMarr.