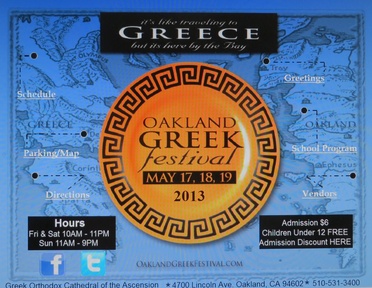 The Oakland Greek Festival will be held this year on May 17, 18 and 19, 2013.  Admission is only $6 and children under 12 are FREE!  The annual festival "offers the chance for visitors to immerse themselves in Greek tradition. Each year, the Greek Orthodox Cathedral of the Ascension hosts three days of dancing, souvenirs, religion, and food. The festival’s slogan is “Greek food with a side of culture,” and it allows curious and well-seasoned attendees alike to get a taste of both." 2

"It is [nearly] that time of year again when the wonderful aromas of Souklavia and Loukoumades waft through the air and the sounds of traditional Greek music and shouts of OPA! resonate in the hills of Oakland. The Oakland Greek Festival 2012 is now in full preparation and we are in need of our most important ingredient...YOU! What would Oakland's Greek Festival be without the many people from our community who come to enjoy all the treats for the ears, and eyes and stomach? It is with great joy and excitement that we invite you to experience our Greek culture." 1

"Food is an important part of the Greek Culture. We eat when we are happy, we eat when we are sad, and we eat just because…but the most important thing is that we eat together. With all of the food we offer, you will simply have to eat your way from one end to another. We have put our heart, soul and favorite Greek seasonings into our many delicious foods for you. From gyros and lamb sandwiches to wine and Frappe beverages, we want you to taste Greece!" 1

According to Paul Fakaros, co-chairman of the Oakland Greek Festival 2013, years ago the event was known as the 'Festival of Greece' but the name was changed at least six or seven years ago.  On the Greek Orthodox Cathedral's website there is a page which might cause some confusion, the Festival of Greece 2013 Cooking Schedule.  This, Paul explained, is an internal document of the church meant only for the ladies who will be cooking for the event, and does not reflect the current name of the event.

Paul Fakaros did want to emphasize that this is a fun event that is meant as a celebration shared with the entire Oakland community, and that everyone should come out and have a wonderful time!

Greek Orthodox Cathedral of the Ascension, site of the annual Oakland Greek Festival 3 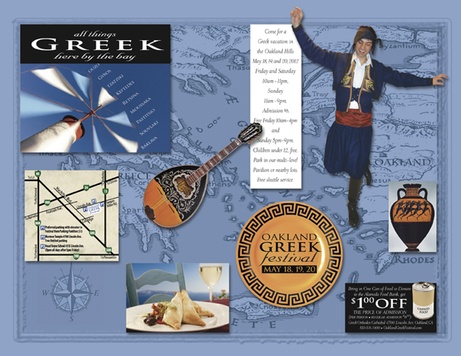